New Zealand after trailing the 5-ODI series against India 2-1 made a miraculous comeback in the fourth game.

New Zealand, who were yet to show any defiance against the might of India in the Test arena looked more comfortable and settled in the One-Day International (ODI) series. After being dominated in the first ODI, New Zealand came back and levelled the series 1-1 winning the 2nd ODI at Delhi, by a close margin of 6 runs. India were once again leading after winning the third ODI at Mohali but New Zealand again sprung back into the series, coming off victorious at Ranchi beating the hosts by a margin of 19-runs. LIVE CRICKET SCORECARD: India vs New Zealand, 5th ODI at Vishakhapatnam

One can blame it on the inexperienced Indian middle order for their lack of application in both the matches that they have lost. India led by MS Dhoni took his chances including players like Kedar Jhadav, Dhawal Kulkarni and Manish Pandey. New Zealand on the other hand, were helped by their young players, who have ensured that they remain in the ODI scheme of things moving ahead. Tom Latham, Matt Henry, Anton Devcich and James Neesham have proved their worth with both wickets and runs. Skipper Kane Williamson have rallied the team with more determination and exuberance in crucial moments. With a chance of winning the five-ODI series, New Zealand will go in all guns blazing at Visakhapatnam.

Let’s have a look into what Williamson-led Kiwis can look like on paper for one final encounter:

Top Order: New Zealand’s most devastating opener Martin Guptill after having a poor show with the bat in Tests and first three ODIs, finally came into his own in the fourth ODI at Ranchi. Guptill showcased his brute strength smashing Indian bowlers all over the park. Guptill in his knock off 72 runs smashed 12 belligerent boundaries. Witness to this was Tom Latham, who went on scoring runs at will. Latham looked more composed and unnerved in the middle. Latham has been New Zealand’s most reliable batsmen in this tour and will be eager to end the trip on a high. ALSO READ: Amit Mishra s chance to stamp his authority in the Visakhapatnam decider

Latham alone in the ODI series has accumulated 225 runs at 75.00. Guptill and Latham’s partnership of 96 runs enabled the BlackCaps reach 260. Coming in at No. 3 will again be Williamson,who has a solitary hundred to his name in the limited-overs. Williamson struck a captain’s knock at Feroz Shah Kolta in Delhi making 118 off 183 balls with the help of 14 fours’ and one solitary six guiding his team to their first triumph at home. Williamson’s presence is paramount to New Zealand’s success as the team looks upon him to rally a bunch of inexperienced lads.

Middle-Order: New Zealand s Achilles heel all through this Indian tour has been their lack of run from the middle order. Constant tinkering and dearth of application by their batsmen in crucial situations have added more vows. In arguably his last Indian tour, Ross Taylor has been an utter flop so far with the bat. Indian spinners in the Tests picked Taylor apart and the ODI series has been no different. Taylor showed promised in pieces but has not displayed anything concrete. Another player on whom the BlackCaps have relied upon is James Neesham. Neesham was expected to be a striking force with the bat but has not been consistent.

Neesham with his bowling has impressed all but New Zealand is in dire need of batting prowess. Their is a close toss-up between Luke Ronchi and BJ Watling. Ronchi who was swift and aggressive in Tests is yet to shine with the bat in ODIs. Ronchi has just made 7 runs in the three games he has featured in. On the other hand, Watling has already outscored Ronchi accumulating 14 runs in his only match. Watling would be favoured given the fact that he can play both defensive and aggressive cricket with equal might. It will be interesting to see who coach Mike Hesson plays between Anton Devcich and Corey Anderson, both of whom have been unable to make any impact in the games they have featured in. With Anderson unable to bowl it has somewhat hampered his chances of playing more often, this goes in favour of Devich who can bowl a few overs when needed and has contained well. ALSO READ: India vs New Zealand: Kedar Jadhav explains his secret to success

Mitchell Santner impressed one-and-all with his all-round performance in Tests has failed to yield his bat to good effect. Santner has been economical in his bowling and been on the offensive completely. New Zealand will hope that Santner comes good with the bat as well especially when it comes to final overs.

Lower Order: New Zealand s bowling has been their strength in each match where they have come out as winners. Tim Southee who was out of the Test series has shown why is a name to reckon with in the ODIs. Southee s spell in the second ODI at Ferozshah Kotla was the game changer. Southee is also New Zealand s highest wicket-taker this series with 7 scalps to his name. Southee s partner in crime Trent Boult has managed to keep a strangle hold on the flow of runs from one end. Boult, to his credit, has 3 maidens overs to his name and together with Southee has taken over 11 wickets as a pair.

New Zealand has played musical chairs with Ish Sodhi and Matt Henry on this tour. Ish Sodhi has looked the least threatening from the visitors side, while Matt Henry with the pace and accuracy has time and again managed to put brakes on Indian batsmen. Sodhi has been unable to keep the pressure tight from one end leaking easy runs after 3-4 balls in the over. Henry, on the other hand, has been spot-on with his bowling so far and chances of him playing will be higher.

(Vishal Mehra is a reporter at CricketCountry, currently tripping on #BlackMirror and #TheFlash, and Enjoys his weekly dose of anime, monthly viewing of sitcoms, daily playing of cricket once every few hours moon, and currently venturing into table-tennis twitter handle https://twitter.com/capturethecatch) 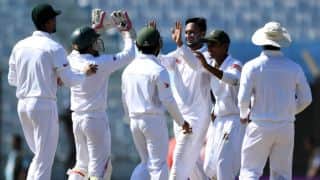