3 T20 Internationals between India Women and South Africa Women now and India have won all. India had won November 30, 2014 at M Chinnaswamy Stadium, Bengaluru in a one-off T20I match and the 2 matches in the ongoing series.

2.75 win-loss ratio of India under Harmanpreet Kaur (11 wins, 4 defeats), their best under any captain. On the other hand, Dane van Niekerk has now led South Africa to a win and 2 defeat; she had led South Africa only once before this series, to a win over Ireland at Solihull in 2014.

509 runs for Smriti Mandhana. She became the 5th Indian (after Mithali Raj, Harmanpreet Kaur, Punam Raut, and Veda Krishnamurthy) and the 51st overall to the landmark. Smriti also went past Veda (507) to reach 4th spot.

1 bigger score by an Indian than Mithali Raj s 76* today 77 by Harmanpreet Kaur against Bangladesh Women at Sylhet in 2013-14. This was obviously Mithali s personal best as well: her previous best was 73*, against Pakistan at Bangkok in 2016-17.

57 highest T20I score for Smriti. Her previous highest was 52, against South Africa Women at Bengaluru in 2014-15.

26 highest T20I score for Nadine de Klerk. Her previous highest was 26*, in her only other match, 3 days ago.

4 hundred-run opening stands for India Women in T20Is. All of them have involved Mithali, but with four different partners Thirushkamini MD, Harman, Punam, and now Smriti. 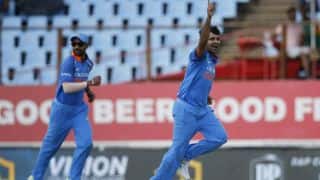