Only Australia have won 5 ODIs in a series in South Africa before. They achieved it in 2001-02 tour.

1.5 win-loss ratio for India against South Africa at SuperSport Park, Centurion, venue of the 6th ODI, their best on any ground in South Africa. They had also won the 2nd ODI of the current series here. Against other teams on the same venue, India have won 2 matches and lost 3.

3 wickets needed by Kuldeep Yadav (16) to become the highest wicket-taker in a bilateral series in ODI history. The list is headed by Javagal Srinath and Amit Mishra (18 each), followed by Patrick Patterson and Craig Mathews (17 each). Kuldeep is tied with Rashid Khan. Srinath, Mishra, and Kuldeep are from India; Patterson got his haul against India (in India); and Rashid, in India.

1 batsman has reached the 10,000-run mark in ODIs while playing as designated wicketkeeper — Kumar Sangakkara (13,341), whose career aggregate is 14,234. Dhoni has scored all his runs as wicketkeeper.

3 dismissals needed by MS Dhoni (293 catches, 104 stumpings) to reach the 400-dismissal landmark for India. He also has 3 catches and 3 stumpings have come for Asia XI.

3 catches needed by Kohli (17) to go past Graeme Smith’s record of 19 in India-South Africa ODIs, the joint 2nd-most in history among non-wicketkeepers. Kohli is currently joint-2nd, level with Rahul Dravid. 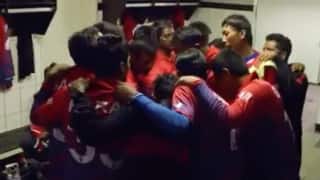