When the caravan arrived in Melbourne early this week, the clouds had gathered around the city. The weather has played an interesting game through the week — a bit deceitful one may add. While it was cloudy for a couple of days, there wasn’t a single drop of rain. Come Saturday, there was bright sunshine, with temperatures soaring. And through the sunshine, a few clouds made an appearance, giving way over the Melbourne Cricket Ground (MCG). There was sunshine in the backdrop, but it poured a little at the venue as it readied itself for the India-South Africa contest at the ICC World Cup 2015.

India and South Africa put the final  touches to their preparation at the MCG on Saturday. India arrived around 11 AM local time for their practice session, when Anil Kumble was addressing the media on his induction into the Hall of Fame. There were three press conferences in quick succession as Virat Kohli followed Kumble and AB de Villiers ended the round. Kohli came in his half-sleeve pull-over and beamed his tattoos as he answered questions. When the reporters were asked to question him in Hindi towards the end, he cheekily asked the media manager, “Which other language?” One of the scribes muttered, “Marathi.” De Villiers followed and he was brief and forthright in his answers. When this reporter asked him about the chances of playing an all-pace attack, his reply was a terse, “Zero.” All eyes on Imran Tahir now. Scorecard: India vs South Africa

But, Melbourne wasn’t talking about India-South Africa or the ICC World Cup 2015. For the diverse crowd in this city, the big event lurks somewhere in the backdrop. Saturday was the Melbourne White Night! A throwback to an oft used cliché by commentators, “all roads led to the” Central Business District. The roads were shut for traffic, tram movements restricted as the festive atmosphere took over. Through the streets, there were dancers, singers and other performers. A movie was being screened in the middle of the road, with sofas laid before the screen. Thousands of people were on the streets enjoying this day. Believe it or not, this festival is scheduled from 7 PM until 7 AM. There is talk about the India-South Africa game being a sell-out. But, who will turn up if they celebrate the night? ICC Cricket World Cup 2015: SCHEDULE & MATCH DETAILS

Through the crowd, you could still find the odd person saying, “I will be there for the game tomorrow.” The subcontinental cab drivers have taken leave, tourists have flown in from different parts of the globe for this game. There will be a sizeable crowd, but will it be capacity? Perhaps, a cricket nut could wish for that on one of the bridges over the Yarra River. There were thousands of locks tied to the bars on the bridge, each signifying a wish from a particular person. Wonder if any of the Indian players came down from their nearby hotel and tied a lock, wishing for a World Cup win, or was there a South African wish to get rid of the infamous tag? ICC Cricket World Cup 2015: POINTS TABLE India vs South Africa ICC Cricket World Cup 2015: A test of character that could set the template for India’s title defence 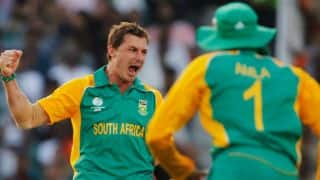