Varun Aaron and Ishant Sharma were the two pace bowlers for India in the first Test.

India went down to Sri Lanka in the first match of the three-Test series at Galle by 63 runs. They now face a task of pulling themselves up and face a Sri Lankan team high on confidence. While the spinners did bulk of the damage  in the first Test, the fast bowlers played their role. but were not a effective as one would have expected them to be. The Indian pacers — Ishant Sharma and Varun Aaron — were on the expensive side and those crucial runs at a rapid pace probably handed over the advantage back to Sri Lanka. Pramod Ananth believes the speedsters will have to chip in to ease the pressure on the team.

Of the 20 Sri Lankan wickets to fall at Galle, 16 were picked up by spinners. Ravichandran Ashwin was the star with 10 wickets, while Amit Mishra picked up 5. Harbhajan Singh picked up the other. Aaron and Ishant started the match off well, having removed the openers in the first innings, which laid the foundation for the spinners to run through the middle-order. READ: Rohit Sharma: Prodigy or Tragedy?

While Ishant kept things tight from his end, Aaron who went for runs, conceding 68 from 11 overs in a total of 183. This amounted to over 37 per cent of runs given away by the side — an unacceptable proportion. Fast bowlers leaking runs is not a phenomenon restricted only to Aaron: Umesh Yadav was on the expensive side in the one-off Test against Bangladesh, going over six an over in a low-scoring Test. As a result Virat Kohli could give a mere seven overs.

The seamers have not been effective with a slightly old ball. These are worrying signs. Giving away quick runs releases pressure off the opposition and gives the initiative back to them. A good fast bowler must keep things tight with the old ball even if he does not get a wicket. Pressure may result in rash shots that may fetch wickets. Depending entirely on the spinner to pick up wickets while seamers leak runs is unacceptable at this level. READ: India vs Sri Lanka 2015, 2nd Test at Colombo: Key Battles

More importantly, are the fast bowlers having an impact? Of late that has not been the case. India had a long break from Tests since their tour of Australia. Aaron and Ishant did not even play ICC Cricket World Cup 2015 that followed the tour. This makes a case of the likes of Umesh and Bhuvneshwar Kumar to return to the side for the second Test. With a few left-handers in the Sri Lankan line-up (including Kumar Sangakkara), playing Bhuvneshwar may make sense, considering his excellent record against the left-handers. He is accurate and moves the ball in the air, and can trouble batsmen with his swing at any stage.

Kohli must consider bringing in changes to the bowling attack to be a bit more effective. It is clear that India is going to face trouble chasing over 150 in the fourth innings and hence need bowlers who can not only take wickets, but also restrict the opposition to a low score. READ: India’s failure to find all-rounder in Test cricket hampering their chances BCCI working group keen on continuing with CSK, RR for next 2 years 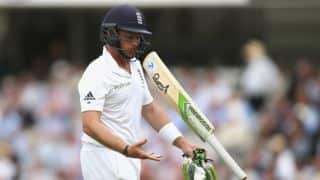 Ian Bell’s dismissals on 1 — and other similar records