An all-rounder who can play the role of the fifth bowler and of an extra batsman would be a boon for India.

With Ravindra Jadeja being axed and Stuart Binny still finding his feet in international cricket, there is a desperate need for India to find an all-rounder who will serve them for a longer run in Test cricket. Most top teams in Test cricket have quality all-rounders in their sides, making them more balanced than India — for they have many options to play around with as far as team composition is concerned. The ongoing Ashes 2015 has shown the differences the all-rounder can create. Devarchit Varma explains why Virat Kohli’s India needs an all-rounder to bolster its chances in Test cricket.

There is no guarantee whether Ravindra Jadeja will ever be back in the Indian Test side. He may get a dekko when India is playing at home on the rank turners where his left-arm spin may come in handy. Otherwise, India will not need his services after an ordinary run that he had in England, New Zealand, and South Africa. He was not even considered in the squad to Australia late last year. It will not be an exaggeration to say Indian cricket management had run out of patience after giving innumerable chances to Jadeja; right now he finds himself out of contention as far as Test cricket is concerned.

Stuart Binny is 31 years old. He has played three Tests — all on the England tour in 2014 — and has stayed away from the Indian Test side since then. Talking about his performances in England, Binny, playing as an all-rounder, remained wicketless — though, to be fair, he scored a match-saving fifty. He was not given a chance in the Australian tour, and did not play any game in ICC Cricket World Cup 2015 as well, which shows that he is yet to cement his place in the Indian Test side. ALSO READ: Stuart Binny proving his worth as premier all-rounder for India

The situation is worrying for India. They do not have a quality all-rounder  who can serve them for long. Yuvraj Singh is away from contention since last one year or so, and so is Irfan Pathan, though neither, to be honest, were genuine all-rounders. There is no one making waves in the domestic circuit as well — someone who can be given a run in whites.

Ashes 2015 has shown us what all-rounders can do. When everyone thought that England would be a lesser side with James Anderson ruled out of the fourth Test at Trent Bridge, the out-of-sorts Ben Stokes stepped up his game and took a six-wicket haul in the second innings tom rattle Australia. The runs Stokes scores are crucial: no one can forget the counterattacking century against New Zealand at Headingley earlier this English summer that helped in a win by 124 runs. He also took 3 for 38 in the fourth innings. ALSO READ: Is it time for India to replace out-of-form Ravindra Jadeja?

England, South Africa and Australia are not the only teams who garner success on the bank of good performances from their all-rounders. Angelo Mathews often chips in with crucial breakthroughs. With bat, he is on the second spot in terms of having the highest batting average after Sir Don Bradman having scored more than 1,000 runs scored as captain. New Zealand keep toying with the option of Corey Anderson. And, of course, Shakib Al Hasan continues to remain the fulcrum of Bangladesh’s success.

With India seemingly struggling with their five-bowler strategy, they would be served better if they discover someone who can chip in with both bat and ball. An all-rounder who can play the role of the fifth bowler and of an extra batsman would be a boon for India, but there is no one who is crying out loud for that role.

The possibilities of Jadeja and Binny stepping up and performing are higher when India are playing at home or in familiar conditions in the subcontinent. But overall, this is a concern. Perhaps this is why India lacks the firepower even in the familiar conditions. 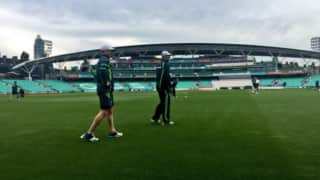