Both the teams should stick to their winning combination ahead of such a high-octane match.

India and Sri Lanka should back their winning combination to bring their best to the ICC World T20 2014 final. Nishad Pai Vaidya reports from the venue in Dhaka.

If you were at the Sher-E-Bangla National Stadium on the eve of the ICC World T20 2014 final, you would have been amazed to find the contrasting training regimes. At the end close to the media centre, the Sri Lankans assembled to start their catching practice with coach Paul Farbrace making his players run-around during the drills. At the far end, the Indians looked very relaxed and indulged in a casual game of football. Did anyone tell them that it is the final? Well, there isn’t much one can do with a day between the semi-final and final and perhaps the Indians were just about warming up.

As the two teams trained, there was some haze in the air and it was quite cloudy at Mirpur. Since it rained cats and dogs during the Sri Lanka-West Indies semi-final, all the talk has been about the weather. Friends from all over the globe have been messaging this writer for frequent updates. “Will it rain?” That is what the visiting journalists have been asking the Bangladeshis. On Saturday, it was cloudy, but more pleasant than any day we have had in Dhaka during the tournament. Since the clouds have held their own for a few hours, one hopes they stay quiet a little longer for the finale.

During the press conference, one of the journalists had asked about Sri Lanka making four changes during the 2011 World Cup final against India. Three years down the line, it is unlikely that Sri Lanka would commit the same errors. Rangana Herath is in splendid form and should be persisted with for this contest. Sachithra Senanayake should also hold his spot. Ajantha Mendis may lose out as the Indians pick him well and Herath has usurped his spot in the side. With the batting line-up staying the same, there could be one possible change as far as the all-rounder’s spot is concerned.

Seekuge Prasanna played the semi-final against the West Indies in place of Thisara Perera. Prasanna was perhaps brought in keeping in mind the slow surface at Mirpur and he did a decent job. With the bat as well, he was quite handy. However, in Perera, they get a hard-hitter, who can do some serious damage down the order. A genuine match winner, there would be an irresistible temptation to play him. But, as Lasith Malinga said at the press conference, Sri Lanka would make decisions looking at the track; even Dinesh Chandimal has a chance to play. But, don’t expect wholesale changes like 2011.

India have a very settled unit and prior to the semi-final, only two spots were up for grabs. And, with Ajinkya Rahane doing well against South Africa, there may only be one berth where India may think about a change. Mohit Sharma had a good outing against Australia, but struggled to maintain that in the semi-final. He started off very well, but was then put under some pressure by the Proteas batsmen. Mohammed Shami has been India’s main bowler for the past few months, but has lost his rhythm a touch in recent times. He may push Mohit, but knowing the Indian think-tank, they too will go with a winning combination.

In this format that is T20 cricket, you never know when the game would change and it is about those crucial moments. And, any player can seal the deal for his side at those junctures. Who will do it? No one knows until it unfolds. A side can only back their hunch and go in with their best possible combination. As MS Dhoni said, there isn’t room for psychological advantage in T20 cricket as it is very short. It is time to put the past behind for Sri Lanka, but the Indians would come in with that fearless attitude. 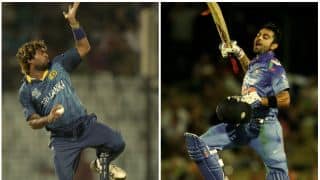