Here are some statistical highlights from the ninth match of Asia Cup T20 2016 was played between India and United Arab Emirates (UAE) at Dhaka.

The ninth match of Asia Cup T20 2016 was played between India and United Arab Emirates (UAE) at Dhaka. UAE captain Amjad Javed won the toss and opted to bat first, but UAE could only score 81 for the loss of 9 wickets from their 20 overs. Shaiman Anwar was the top-scorer for UAE as he made 43 runs while for India Bhuvneshwar Kumar took 2 wickets while the rest of the bowlers picked up one wicket each. In reply, Rohit Sharma scored a quick-fire 39 runs, Shikhar Dhawan spent remained not out to take India home, and Yuvraj Singh — who was promoted to No. 3 — scored a quick 25 not out from 14 balls. Umang Pabari looks at some of the statistical highlights of the match. FULL CRICKET SCORECARD: India vs UAE, Asia Cup T20 2016 Match 9 at Dhaka

81 for 9 – The score made by UAE against India, which is the second-lowest total any team have posted against India in T20Is. England’s score of 80 from 14.4 overs is at top in that list, which they made against India at Colombo (RPS) on September 23, 2012.

5 – Number of Maidens bowled by Harbhajan Singh in his T20I career, which is joint second-most by a bowler in T20Is. Nuwan Kulasekara is at the top in that list with 6 maidens, while Trent Johnston, Ajantha Mendis, and Harbhajan are at the second place with 5 maidens each. READ: Defeats notwithstanding, UAE should be proud of their campaign in Asia Cup T20 2016

23 – Number of Maidens bowled by Indian bowlers in T20Is, which is joint second-most by any team in T20Is. Pakistan are at the top of the list with 25 maidens, while Sri Lanka are at second place along with India, with 23 maidens.

4 – Number of Maidens bowled by India’s bowlers in their match against UAE, which is joint most by any team’s bowlers in the first innings of a T20I. In other instance, Nepal’s bowlers had also bowled 4 maidens in a match against Hong Kong at Colombo on November 24, 2014. READ: India’s biggest victory and 10 other statistical highlights from Asia Cup 2016 match between India and UAE at Mirpur

336 – Number of Runs scored by Rohit Sharma from 10 matches in T20Is this year, which is the most by any player in T20Is so far in 2016. He scored 39 runs from 28 balls, hitting seven fours and a six against UAE. Hamilton Masakadza is at second place on that list with 318 runs.

21 for 2 –UAE’s score against India in the power play overs was the joint lowest total made by any team against India. The other instance happened when Zimbabwe scored also 21 runs with loss of 2 wickets against India at Harare in 2010. 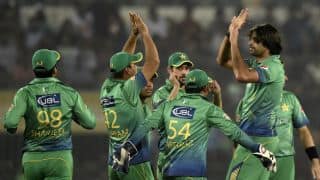