India could be looking to give those on the bench, especially Pawan Negi, a chance to ahead of the ICC World T20 2016.

With Team India’s unbeaten run so far in the Asia Cup 2016 tournament, Thursday’s match against UAE offers little excitement to the fans in terms of importance the fixture holds. Even if UAE manage to produce a surprising win, it will not alter the situation or the Asia Cup 2016 Points Table anyhow. But what will be interesting to see will be the kind of approach the Indian cricket team captain MS Dhoni has towards this game. After convincingly beating Bangladesh in the first match, followed by the demolition of arch rivals Pakistan, India made it three in three as they trounced Sri Lanka. India could be looking to give those on the bench, especially Pawan Negi, a chance to ahead of the ICC World T20 2016. FULL CRICKET SCORECARD: India vs UAE, Asia Cup 2016 Match 9 at Dhaka

Dhoni’s decision of not trying to tinker with the batting order has been a key aspect for India’s extremely successful batting performance in the Asia Cup 2016, when compared to other teams. Dhoni has followed his mantra of achieving a settled unit before any important tournament has been on the fore. But what we might see against UAE could be different. Dhoni and the team management will be keen to experiment with those who have been on the fringes for long.

Ajinkya Rahane might get another game against UAE, and he will be keen to make his mark after poor game against Pakistan. Resting either of Rohit Sharma or Shikhar Dhawan could be on Dhoni’s mind. It would be more of a surprise if Virat Kohli and Suresh Raina sit out. Also, Dhoni’s post-match comment on how it was nice seeing Yuvraj Singh find the middle of the bat and hit some sixes could mean that the stylish left-hander will continue to feature, making most of the rhythm he is in. Apart from that, Negi, the left-arm-spinner and an explosive batsman might be given an opportunity in place of Ravindra Jadeja. Remember, Jadeja has been a regular starter in the team and has certainly been India’s best fielder over the last few matches. Jadeja too can enjoy a brief rest.

Harbhajan Singh though, might also be a part of the playing XI against UAE. He travelled to Australia for the three-match T20I series but couldn’t get a place in the starting eleven, and was also a part of the team that played Sri Lanka but again remained confined to the bench. He will be raring to have a go.. It will not be wrong if India decide to rest Ravichandran Ashwin and get Harbhajan Singh in.

Another crucial change could be that of Bhuvneshwar Kumar coming in for an-injury prone Ashish Nehra. Nehra has been excellent for Dhoni in this tournament and his contribution along with his experience that he has brought into the side will be vital in the much-awaited ICC World T20 2016. Getting wickets early on seamer-friendly wickets has been Nehra’s job and he has done that exceedingly well. READ: India vs UAE Asia Cup T20 2016 Match 9: Virat Kohli vs Amjad Javed and other key battles

On the other hand, in spite of a substandard tournament, UAE will be out there to find some respect. They will be hoping that their batsmen play some aggressive cricket and also the bowlers can come out attacking. They will try to bring their A-game against an opposition as strong as India and get noticed. A key point to remember here is that UAE are not a part of the ICC World T20 2016 qualifiers as they couldn’t end up in the top 4 in their group. So, this becomes all the more significant for them to prove their worth.

India, however, will have to guard against complacency. . Their intensity must be maintained ahead of the Asia Cup final. Dhoni, after all, has the chance of ‘experimenting’ with his side, even though he is not sure if the word is appropriate to be used in Indian cricket circles.

(Karan Dewan is a reporter at CricketCountry) 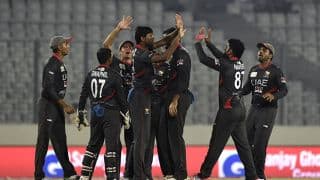