India have already take an unassailable 2-0 series going into the fourth and final Test against West Indies.

The fourth Test between India and West Indies at Port-of-Spain has will have no consequence to this series as the visitors have already taken an unassailable lead in the four-Test series. But both teams have something to play for. West Indies will want to get on the board and play for pride, while a win for India, will see them remain on top of the ICC team ranking, which was handed to them after Australia were whitewashed by Sri Lanka. While Virat Kohli has often gone on to say that rankings do not matter to him, he certainly will want to win and hang on to it this time, having received it on a platter. As the fourth Test is upon us, let us have a close look at the interesting battles for this match. Full Cricket Scorecard: India vs West Indies, 4th Test match

West Indies vs West Indies: West Indies have often gone into self-destruct mode in this series. There have been instances where their batting has just collapsed and their fielding has been below par, making a couple of huge blunders. Ravichandran Ashwin was dropped by Shane Dowrich when he was in his 40s at Antigua. He went on to make 113. In the third Test at St Lucia, Ashwin was caught after Shannon Gabriel had over-stepped. He went on to make 118 on that occasion and went on to build – what turned out to be a match-winning partnership with Wriddhiman Saha. India vs West Indies, 4th Test, team preview

Not to forget their epic batting collapse at St Lucia in the first innings. From 128 for 1, they were bowled out for just 225 and their last seven wickets fell for just 23 runs in a span of 17-odd overs.

India’s bowling woes against the tail: India have often struggled to dismiss the tail, after they have gotten rid of most of the top-order batsmen. The likes of Javagal Srinath, Anil Kumble and to a certain extent even Zaheer Khan were extremely effective in getting rid of the tail quickly. But India over the last few years have struggled in that area and this series is no different. It cost them a win in the second Test, when the likes of Shane Dowrich and Jason Holder along with Roston Chase played out the Indian bowlers without much trouble.

We saw this even in the first Test, where the last three wickets had fetched West Indies close to 100 runs in both the innings. India were however efficient in the third Test, where they managed to get all 10 West Indies wickets in close to three sessions. READ: India vs West Indies: Virat Kohli & co eye big win

Darren Bravo against short balls: Bravo has not been in particularly good form this series. He occupies the coveted No. 3 position and has failed to deliver so far. We saw a gritty fifty in the third Test, but he did not get any support from the other end. Bravo has been very poor when it comes to facing the short balls and has been set up beautifully by the Indians in this series so far. He was caught at skips in the second Test and hooked the ball straight to the fine leg fielder in the third. Hopefully he plays better in the fourth Test. READ: IND vs WI, 4th Test: 5 Indian cricketers to watch out

Shai Hope vs Leon Johnson: the West Indies selectors finally came to their senses as they dropped Rajendra Chandrika for the third Test. They had recalled Hope for this match, but it was Johnson, who got the nod ahead of Hope. Johnson played well for his 23 in the first innings before he needlessly ran himself out and then was dismissed for a duck in the second innings, when West Indies were looking to save the match. Hope on the other hand has a century against India in the warm-up match. With the series already lost, it will not be the worst of ideas to rope Hope for the final Test. READ: IND vs WI 4th Test: 5 West Indies players to watch out for

Marlon Samuels against playing sensible cricket: West Indies’ most experienced player, Samuels has time and again let his team down. He does all the hardwork, gets his eye in and throws it all away like a rookie. One can understand if someone like Chase- new to international cricket does that. But Samuels, who has been playing Test cricket since 2000, his innings have been extremely responsible. He just has a couple of fifties in the last year (Both in the series). But what is most irritating is the fact that he has failed to convert them. Not to forget his habit of fending outside off of deliveries that can easily be left alone. Maybe Test cricket is not Samuels’ piece of cake anymore! READ: India vs West Indies 4th Test: Likely XI for Team India

Rohit Sharma vs Cheteshwar Pujara: Rohit was picked for the third Test after Pujara failed to make an impact in the first two Tests. Moreover, it was believed that Pujara is not as quick as scoring runs as Rohit is and during crunch situations (like rain interruptions) it will be Rohit, who can press on the accelerator when needed. Rohit strikes at 52.14 in Tests and Pujara has a strike rate of a little over 48. Sadly Team India do not see the fact that Pujara averages close to 47 and Rohit averages little under 33. READ: IND vs WI, 4th Test: Likely XI for hosts 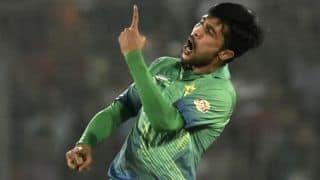