Rohit Sharma should be asked to go back to domestic cricket, rise through the ranks and try and break open the national doors.

He came, he went and yes, he did not conquer, yet again. Familiar story, is it not? Rohit Sharma and Test cricket have begun to sound odd in the same line. The entire batting line-up was re-jigged to accommodate the batting talent, who averages less than Ravichandran Ashwin with bat in Test cricket. It did not matter: the Indian top-order collapsed. Virat Kohli pushed himself and Ajinkya Rahane up the order to protect him. And Rohit finally made an appearance at No. 5. When the need of the hour was to grind and patience, he poked one outside off-stump handing debutant Alzarri Joseph his second wicket. As easy as that. Yet again, Twitter exploded with memes. FULL CRICKET SCORECARD: India vs West Indies 2016, 3rd Test at St Lucia

Just when the belief began seeping in that Kohli and coach Anil Kumble did not believe in the theory of creating sacrificial lambs to protect the scared cows, we ended up being trolled (like Rohit).

Selection worries are a happy problem but ‘being fair’ is a parameter that should not be compromised. Indian think-tank seems to have created a couple of categories — the showmen, the holy cows overflowing with talent and always ready to be milked, the potential sacrificial lambs who do not appeal to the billboards and perennial benchwarmers.

While Virender Sehwags do not come everyday and he may not even be the dominant southpaw Gautam Gambhir was at his peak, it is safe to say Murali Vijay has been one of India’s best batsmen since his comeback in 2013. He has numbers to back it too.

The numbers are not extraordinary but 15 fifty plus scores in 46 innings reflects consistency. A rock with enormous patience for which he is called ‘Monk’, Vijay’s injury ahead of the second Test paved way for KL Rahul. The Karnataka youngster responded to the opportunity with a 158 and selection dilemma for the third Test was aplenty.

Shikhar Dhawan’s 84 in the first Test at Antigua had assured him a berth and therefore for Vijay to return, it had to be the spot of Cheteshwar Pujara, the man who was hailed as India’s ‘next Rahul Dravid’. After failing at Antigua, Pujara batted very slowly for his 46 at Jamaica; with Vijay fit, he should have filled the slot. Unfortunate, but still a fair call. ALSO READ: Rohit Sharma: Time to make or break in Test cricket?

However, when captain Kohli revealed Rohit, not Vijay or Pujara, was part of the XI, journalists and fans tore their hair in agony and pressed the television volume on their remote control in utter disbelief: had they heard what they had just heard?

Outside the subcontinent, Rohit has scored 383 runs at 23.9. Does that warrant a Test XI selection ahead of Pujara or Vijay?

That has been the story with Rohit. Having made his international debut in 2007, Rohit’s inconsistency has hurt India. Thanks to his abilities to make batting look good and win odd games on his own, he was given a much longer rope than any of his peers to establish himself in the side. He justified the faith and turned into a limited-overs monster, in 2013, years after international debut.

Mere mortals like Ambati Rayudu, Manoj Tiwary, Robin Uthappa and others have had to languish in oblivion sticking to the final category as aforementioned — perennial benchwarmers.

While, there is no doubt Vijay, who was fit for selection should have played with Rahul pushed to No. 3, and if Vijay was not fit, Pujara should have been retained ahead of Rohit. The conditions at St Lucia demanded the ‘monk-like’ patience, which both Vijay or Pujara could have produced.

Why Pujara over Rohit?

Rohit’s fans may argue that the selection was just as Pujara too does not boast a great record outside Asia but still the numbers look better than Rohit’s. Pujara has 856 runs at 29.51. The other hallmark of Pujara’s batting is he can grind, cut off the extravagance and buy time in the middle, which was the need on Day One at Gros Islet. In addition, the batting order did not have to be reshuffled.

Pujara had a terrible 2014 and as a result his batting average came crashing down from the high 60s to the steady 40s. Despite averaging close to 47 in Tests, this is not the first time he had to make way for Rohit.

In Sri Lanka, the then Team Director Ravi Shastri publically hailed Rohit and claimed he was the potential future for Team India at No. 3. A lamb again sacrificed for the holy cow. Spending two Tests in the benches, Pujara had to wait for both the openers to get injured to walk into the side for the third Test.

Quite a contrast here, like others pushed themselves off from their comfort zone to accommodate Rohit at No. 5 at Gros Islet, in Colombo, Pujara had the thankless job of opening in difficult conditions and he responded with a match-winning hundred. He also carried his bat. ALSO READ: India vs West Indies 3rd Test: Virat Kohli replacing Cheteshwar Pujara with Rohit Sharma uncalled for

Kumble was a gritty grinder during his playing days and who better than him will understand that.

With the younger likes of Shreyas Iyer, Karun Nair and others waiting in the foray and more able likes in the benches, it is time we let go off the holy cow (not offending any gau-rakhshaks).

On a serious note, let Test berths not be inheritances. Provided he fails in the second innings, it is time for the Indian think-tank to accept that Rohit has got his due in Test cricket. The age-old story of creating sacrificial lamb to protect the holy cow should be put to rest. Rohit should be asked to go back to domestic cricket, rise through the ranks and try and break open the national doors. If he is good, fair enough. After all, fair and unbiased selection is what we seek. 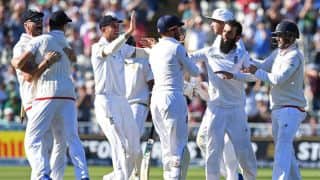