It is high time Rohit performs for the team in Test matches as he is a proven match winner in ODIs and T20Is.

Team India is currently preparing for their tour of West Indies comprising of four Tests. Anil Kumble is already in action with the young Indian Test side, preparing for the Caribbean tour at the National Cricket Academy (NCA) in Bengaluru. The series will be a test of temperament for the players in West Indies, with most of them being new to the conditions. Rohit Sharma is among a few of those who have played in the Caribbean in the past, but his lackluster Test average challenges the team management over the selection of the best playing XI. And if at all Rohit makes it to the team, it will be interesting to see if he gets a long run. ALSO READ:KL Rahul: Anil Kumble wants Indian players to take decisions on their own

Shikhar Dhawan s inconsistency has become permanent, and in Rohit, India have another batsman whose failures can add to their woes. Rohit s twin centuries in his debut Test have been the only bright spot so far in his Test career. He has been an asset in One-Day Internationals (ODIs) but his graph is yet to surge in Test cricket.

Rohit is likely to bat lower down the order, likely at No. 5 or 6 a position where batsman is needed to play according to the situation, mostly batting with a tired top-order mate or with the tail. He has also been given a chance to bat at No. 3, ahead of Cheteshwar Pujara, but did not do much to cement his place. Pujara has been inconsistent too, but the general belief on his Test credentials is higher than that of Rohit s.

Maybe, Rohit has not succeeded in Tests due to his habit of throwing his wicket at wrong times. For Rohit, it is easier to shift between ODIs to T20Is and back, but the same is not the case when it is about Test cricket.

Rohit has the shots and can pace his innings well in limited-overs format. In Tests, it is all about resilience and patience to keep doing the same thing every over again and again. The ability to leave the ball outside off stump is a big weapon to have for any batsman.. Perhaps, Rohit has not been able to execute it well. Playing spin with the red ball is equally tough as playing it against fast bowlers. The ball keeps on moving for a longer time and that is why the runs scored in Tests gets value in a batsmen career. ALSO READ: Rohit Sharma: I am not here to please anyone

His average is decent in Sri Lanka at 33.66 and 40.66 in New Zealand that too courtesy of a few unbeaten innings. With a big question mark over his Test credentials, Rohit is running a race against time to cement his place and the West Indies tour will be a do-or-die for him in a quest to remain in the team.

Rohit s potential as a batsman cannot be doubted, but he will surely not be liked to remember as a batsman who could not deliver in the oldest format of the game. 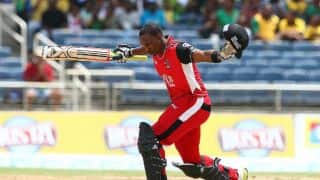