Virat Kohli has added another milestone to his record-setting ODI career, becoming the fastest batsman in the game s history to reach 10,000 runs.

Virat Kohli has added another milestone to his record-setting ODI career, becoming the fastest batsman in the game s history to reach 10,000 runs.

Kohli achieved the landmark in his 205th ODI innings, a whopping 54 fewer than Sachin Tendulkar needed in 2001. Tendulkar was the first batsman to get to 10,000 runs, making history against Australia on March 31, 2001 in his 259th innings.

Kohli went past him in record time during the second ODI against West Indies in Visakhapatnam on Wednesday when he got a single towards long-on in the 37th over.

The Indian skipper was given a life on 44 when Jason Holder failed to hold on to a running catch at mid-off.

Kohli follows Tendulkar, Sourav Ganguly, MS Dhoni and Rahul Dravid as the fifth Indian to 10,000 ODI runs and is the 13th batsman overall.

In 2013, Kohli had become the fastest Indian batsman to 5,000 ODI runs when he got there in his 114th innings – the same as West Indian legend Sir Vivian Richard had taken. The 29-year-old has scored 36 ODI centuries to sit 13 behind Tendulkar s all-time record of 49. 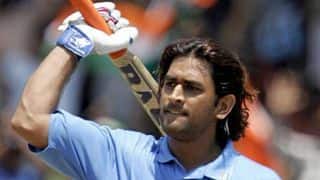 I sensed he’d be a big player: Abdul Razzaq on MS Dhoni's 148 vs Pakistan 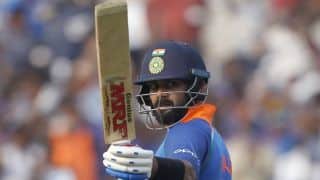