The last time each of India's top six batsmen crossed 30 in the same innings, Sachin Tendulkar was playing his penultimate match for India.

Shikhar Dhawan and Virat Kohli scored centuries and added 227 for the third wicket, but the rest of India’s batting failed to capitalise on their stand. KL Rahul, Rohit Sharma, and Ajinkya Rahane scored only 16 runs between them before Wriddhiman Saha’s maiden Test fifty helped consolidate India’s innings. This has been the trend for some time; one or two batsmen flourish but the rest fail to build on that platform. Shiamak Unwalla feels that while India’s batting shows a lot of positive signs, they have yet to learn how to fire as a team. READ: India bowled out for 375, lead Sri Lanka by 192 runs on Day 2 of 1st Test at Galle

The last time each of India’s top six batsmen crossed 30 in the same innings, Sachin Tendulkar was playing his penultimate match for India. After Murali Vijay and Shikhar Dhawan scored 77 for the opening wicket, India had partnerships of 0 (Vijay and Dhawan were dismissed within two balls of each other), 144, and 94. Cheteshwar Pujara and Rohit Sharma were the only ones to score centuries, but Tendulkar and Virat Kohli scored fifties. Indian batsmen clicked as a whole, and despite no one getting a big century (113 was the highest score of the innings). India piled on 495 against the West Indies. READ: Shikhar Dhawan becomes 3rd Indian opener to score Test centuries in consecutive innings overseas

Flash forward to India’s tour of Australia 2014-15. With India chasing 364 in the fourth innings of the first Test at Adelaide, Vijay (99) and Kohli (141) added a fantastic 185 for the third wicket to take India to 242. From that position of strength, India crashed to 315 all out and lost a Test they ought to have won. The second Test at the Gabba actually saw a more consistent performance from India. Vijay was the only one to score a century (144) but everyone in the top eight reached double figures. But instead of building on that, India crashed to 224 all out and lost. READ: Virat Kohli, Shikhar Dhawan create history at Galle in 1st Test against Sri Lanka

The third Test at MCG was another good example of two batsmen’s hard work being undone by a lack of fight from the others; Kohli (169) and Ajinkya Rahane (147) added 262 but despite that India added only 56 after their dismissals. The fourth Test at SCG again followed a similar trend; KL Rahul (110) and Kohli (147) added 141, but Rahane and Suresh Raina failed. Luckily for India Ravichandran Ashwin (50) and Bhuvneshwar Kumar (30) helped India reach 475. India have gone past 400 in at least one innings in each of their last six Tests, but more often than not it is one or two batsmen who score big while the rest fail to build on that. VIDEO: Shikhar Dhawan suffers blow on the helmet during India vs Sri Lanka 2015, 1st Test at Galle

The signs are extremely encouraging for India; the openers (especially Vijay) usually provide a solid base while Kohli and Rahane usually consolidate in the middle order. What is lacking is a consolidated all-round batting display that can see India bat out the opposition in one innings itself. If the Indian batsmen can learn how to construct back-to-back partnerships, the wins will start coming thick and fast. READ: Virat Kohli’s lack of daddy hundreds a worry for India 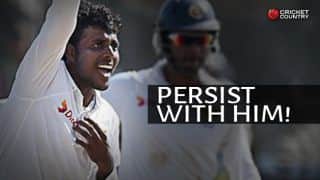