India didn’t even manage to go into the tail during the first Test at Adelaide.

India came into Day Three of the Brisbane Test with a slight advantage over Australia having reduced the host to 221 for four, trailing by 187 runs. India would have wanted to dismiss Australia between 300-350 and would’ve looked to be in a commanding position at the end of the day. But the Australian tail wagged and it added to India’s misery on the field today. Pramod Ananth looks back at a few recent instances where India could not dismiss the tail-enders cheaply, which cost them the match eventually.

India didn’t even manage to go into the tail during the first Test at Adelaide as the visitors managed to pick up just 12 wickets in the 48-run loss against Australia. In the second Test, the Australian tail was tested in the first innings and it contributed a huge chunk of runs, which has put Australia in the driving seat.

India began Day Three with two quick strikes. Mitchell Marsh departed first for 11 and he was soon followed by Brad Haddin for six. Australia were in a spot of bother at 247 for 6, when Mitchell Johnson walked in. India would have still believed that they could bowl Australia for under 300. Johnson and captain Steven Smith had other ideas. Johnson played his natural game and he took on the opposition right from the beginning. He and Smith put on 148 runs for the seventh wicket in quick succession and Johnson contributed 88 of them at a strike rate of 94.

Australia were trailing only by 13 runs at this time. Mitchell Starc, like Johnson, started to get a move on as soon as he came in. He ensured that the deficit was wiped out and set a platform for a big lead with 52.  Nathan Lyon, who won the match at Adelaide with his off-spinners made a run-a-ball 23. Josh Hazlewood, who picked up five wickets on debut, remained unbeaten on 32 on his debut innings. The Australian batsmen between No.s 8-11 contributed 195 runs between them, which ensured the hosts take a 97-run lead.

There have been quite a few instances in the recent past where India have failed to dismiss tail-enders cheaply. Take the previous Test series against England for example. India had scored 457 in the first Test at Trent Bridge, thanks to a century by Murali Vijay. England looked set to concede a huge lead as they were 298 for nine, when James Anderson walked in at No. 11. Anderson scored a record-breaking 81 and along with Joe Root stitched a partnership of 198 runs for the final wicket. Stuart Broad, batting at No. 8made a brisk 47 early on England managed a slender lead but that partnership would prove vital as England would go on to save the match.

Another such instance was in the second Test against South Africa at Durban in 2013. India were bowled out for 334 in the first Innings. South Africa rode on a superb century from Jacques Kallis. The Proteas were leading by 50 runs when Kallis was dismissed and looked to close in on the South African tail. But, Robin Peterson came in at No.9 and put on a 110-run stand with Faf du Plessis and took the game away from India. Peterson contributed 61. South Africa extended their first innings lead to 166, and bowled India out for 223 and won the match comfortably by 10 wickets. India went on to concede the two-match series 1-0.

Going further back, in the series against England at home in 2012, India needed to win the final Test at Nagpur to level the series at 2-2. England scored 330 in their first innings and it was their No. 8 batsman Graeme Swann who’s 56 ensured that England went past 300. India in pursuit to level the series declared at 326, still trailing by four. England batted out the remaining time in the match and the game ended in a draw, with England winning the series 2-1. Swann, with his half-century not only added valuable runs but played out a few vital hours, which could’ve swung the game India’s way.

India’s inability to dismiss tail-enders has always had a huge impact on the series. One can only hope that this is not the case in the ongoing series against Australia.

(Pramod Ananth is a reporter at CricketCountry. He has represented Karnataka table tennis under-15 and a hardcore supporter of Liverpool FC. He can be follwed at @pramz.) 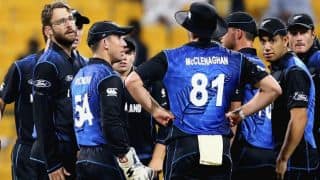