India have underperformed away from home for the last few years.

India have once again slumped to a series defeat overseas, but this time it is in Bangladesh. Amit Banerjee analyses India’s deteriorating overseas performances of late, and predicts what the future would be if they continue the trend.

The Indian cricket team have traditionally been “lions at home and lambs abroad”. While it is something that every team can relate to, India personify the saying more than any other. The contrast between India’s winning rate at home and abroad across formats is one that bears a stark contrast, and the situation appears to be no different under the leadership of MS Dhoni. READ: Bangladesh should now get the respect which they truly deserve

India lost the second game of the three-match One-Day International (ODI) series against Bangladesh to surrender the series to the team that were, until recently, referred to as ‘minnows’. India have been poor tourists for quite some time now, but the surrender in Bangladesh takes things to a whole new level.

Not that Bangladesh are to be denied credit for outplaying India in every department in both the ODIs so far. The team have evolved nicely in the last couple of years, from a one-man show to a highly talented side that is achieving a new milestone with each day. READ: Bangladesh fans celebrate series win against India

India, however, were beaten without any fight. The bowlers were wayward in their lines, and allowed the batsmen to milk them for runs freely. The batsmen, on the other hand, struggled to settle themselves at the crease, and were dismissed cheaply. Add issues relating to the fielding department to those, and the team have failure written in bold in its destiny.

India’s overseas woes can be traced back to the 0-4 blanking in the Test series during the tour of England in 2011, right after the memorable victory against Sri Lanka in the final of the World Cup held that year. The slide continued down under, where India faced a similar thrashing at the hands of Australia. India have continued to be mediocre in Tests ever since, facing similar defeats in South Africa and New Zealand, before losing to England and Australia again in 2014-15. READ: Bangladesh trounce India by 6 wickets in 2nd ODI; pull off historic series win

The ‘Men-in-Blue’ have been slightly better in ODIs, though, with their victory in Champions Trophy held in England in 2013 being a fond memory, aside from 36 wins out of 69 ODIs played abroad in the last four years. That however, does not absolve the Indian team of several under-performances, the latest one of which is the loss to Bangladesh.

Dhoni has been at the helm of the Indian team for nearly a decade now, and his position as the captain never came under threat for the most part, especially under the N Srinivasan-led Board of Control for Cricket in India (BCCI). However, the rise of Virat Kohli as a leader has forced Dhoni to start taking his captaincy, especially on foreign soil, more seriously. Otherwise, current BCCI chief Jagmohan Dalmiya may not find a reason not to promote Kohli as the ODI skipper in his place. 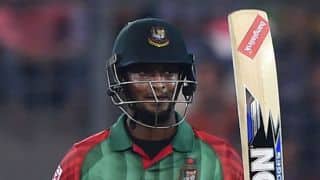