“How will you stop Virat Kohli?”

It was a simple question, put to Australian wicketkeeper-batsman Alex Carey after India won in Sydney by six wickets. Tests will be a different ball game, with out pacers and Nathan Lyon, he said.

It wasn t a definitive game plan. Hell, it wasn t even a proper answer. It was more wishful thinking.

On Sunday night, Kohli showcased to the entire Australian cricketing fraternity just what is in store for the next six weeks when the red-ball season gets underway. Some might have already seen the trailer four hundreds in four Tests on the 2014-15 tour but things were different then. Kohli didn t dominate that series, Steve Smith did.

Until his ban then, Smith was the best Test batsman around. That doesn t hold water anymore Kohli is the undisputed king today and it is why Australia should fear him. He returns, not as a vice-captain who stood in two Tests four years ago, not as a batsman waiting to get his due. He returns as the world s best batsman across formats, period.

Ask yourself this was India in any danger at any point during their 165-run chase on Sunday night? The answer isn t no . The answer is as long as Kohli was at the crease, Australia had no chance . This isn t about singing praises for yet another finished chase from Kohli. It is about underlining the Indian batting line-up s general dependency on him.

So much so, that as he went about claiming that best batsman crown, India s reliance on him increased across formats. Four years ago, there were likes of Murali Vijay, Cheteshwar Pujara and Ajinkya Rahane to ease the burden a bit. This 2018 overseas cycle has blown that assumption away it is all about Kohli. Perhaps, it paints a still target for Australian bowlers, giving them a slim ray of hope for the coming summer.

This is where the focus shifts on other batsmen. In white-ball cricket at least, India have two others to rely on Shikhar Dhawan and Rohit Sharma. There is something different about Dhawan s stroke play off late he is hitting more cleanly, taking the aerial route at will. Maybe his mind isn t cluttered at the moment given how conditions have been one-dimensional since the end of England tour. Maybe, he is simply in great white-ball form, reaching that maturity stage in his career every batsman does.

For Sharma, well, he is already past that maturity stage in white-ball cricket. When he is at the crease, there is an assuredness about his display, and he is currently the second-most bankable batsman in this Indian ODI/T20I side after Kohli of course. It has taken nearly a decade for him to scale these steps, yet with every outing he proves that the team can rely on him.

The problem herein though is obvious. Dhawan is out of Test reckoning and Sharma is finding his way in and way out. Come to think of it, Australia only need to hit the Kohli-shaped target during the Test series and the Indian batting might simply unravel. It is a worrisome thought going from T20Is to Tests, even if India s batting might was on full display at the SCG on Sunday.

Combined together, Dhawan, Sharma and Kohli form the most potent top-order in world cricket today. It only seldom happens that all three of them fail together, but they do mostly fire in tandem as well. Simply put, this Sydney T20I gave a glimpse of India s strength now in the build-up to the 2019 ICC Cricket World Cup, their fitness and form is as important as that of Jasprit Bumrah, Bhuvneshwar Kumar and Kuldeep Yadav.

The middle order continues to be a problem. Rishabh Pant, as he has shown in the last four T20Is put together, is far away from a finished product. Thanks to his volatile shot selection, he shouldn t be considered for the World Cup s second wicketkeeper slot that should be Dinesh Karthik. Even so, it isn t about what happens later on, but it is about the missing link between the top and middle order.

KL Rahul features prominently in this discussion, and at present, he is a lost soul in limited-overs cricket. This is a batsman who set the 2018 Indian Premier League on fire, and carried his form to Manchester and scored a hundred batting at number three. Since then, timing and form have both deserted him. So much so that he is completely out of reckoning for a middle-order slot in ODIs, and now is only a back-up opener therein.

So why is Rahul being persisted with in the middle order in T20Is? Common sense would have asked for Manish Pandey to be included in the playing eleven, but the team management perhaps had an eye on the Test series and thus wanted to give Rahul some valuable batting time in overseas conditions. It hasn t helped, clearly.

At Brisbane he batted at number three and was scratchy at best. At Sydney, he batted at four, and while he started well, the asking rate was too much for him. Batting in the middle overs, with the field spread, is not everyone s cup of tea. This is where the team management has to step in, or indeed Rahul needs to make a decision.

There needs to be a call made either he is used only as a back-up opener when the few opportunities present themselves, or he is considered as a middle-order batsman in T20Is and should be dropped on form.

The worry is enough damage has perhaps already been done to Rahul s confidence ahead of this vital Test series. 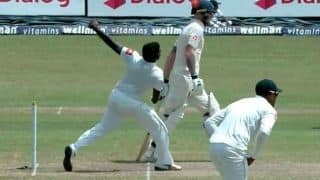