Roughly six years into his international career, Bhuvneshwar is aware of what it takes to sustain himself at the highest level.

Speed and swing are the two traits that fast bowlers strive to combined, but few have been successful in finding the right balance between the two.

India s Bhuvneshwar Kumar is no different. He recently added a bit of pace, but seemed to have comprised on swing. Ask him about his success, and the 28-year-old says that he is close to getting the balance right.

“It is very tough to find the right balance between speed and swing. If you look at the fast bowlers all round the world, after a certain limit or pace, they also struggle to swing the ball. For me as well, it was difficult in the first series after adding a bit of pace to get my swing going. But I practiced hard, bowled in the nets, consulted with the coaching staff and got the balance going. And it has started to work for me,” Bhuvneshwar tells CricketCountry.com on the sidelines of a promotional event for ASICS.

Bhuvneshwar, who has the lowest bowling average (26.09) among Indian fast bowlers since his Test debut in 2013, missed out on the high-profile England Tests owing to a back injury. Even though he was disappointed not to play, Bhuvneshwar realises it is an occupational hazard.

Missing the England series was disappointing, but I had almost a month to get back to full fitness with the rehab in NCA, he says. I wouldn t not say it was a difficult time, but it was a frustrating time, because as a player I would want to play. But we have to realize that injuries are part of life, and missing out on certain series is part of the game. I kept that in mind and did my rehab. I had a positive mindset and that helped me recover quicker.

Bhuvneshwar last played Tests in South Africa in January this year, and in his absence Jasprit Bumrah stepped up by claiming 14 wickets in three Tests against England after missing the first two. Last week, Umesh Yadav claimed 10 wickets in the Hyderabad Test versus West Indies to make the most of a rare opportunity with Bhuvneshwar and Bumrah rested and Ishant Sharma nursing an injury.

For Bhuvneshwar, such competition is good for the Indian team.

It is healthy competition,” he says. “We know that we all are different bowlers, and some of them for different formats. And we learn from the teammates and other as well. Off the field we are very close and it is all about learning. Everyone practices in a very similar way, we all have same support staff and facilities.”

Roughly six years into his international career, Bhuvneshwar is aware of what it takes to sustain himself at the highest level and that keeps him ahead of the competition.

The only difference for me is the is the mindset you have towards the game. I believe in smart work,” he says. “Everybody puts in the hard work, but being smart about it is way I look at it. We play so much of cricket that we have to keep a tab on everything from getting the proper rest, recovery and practice. so for me it s the smart work.”

On his association with ASICS, Bhuvneshwar says that the shoe manufacturer is ideal for fast bowlers.

“Fast bowling is a thing were there is load on the body and ASICS keeps it in mind and is is quite helpful for a fast bowler like me. The brand philosophy, I Move Me , for the me has a simple logic that you the your best inspiration. And if you are able maintain your fitness, your mindset also improves and ASICS is a brand that helps me in that regard, he says. 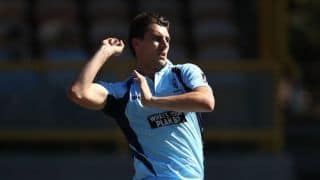