Sarfaraz’s purchase of Rs. 50 Lakhs could just prove out to be bargain.

The new season of Indian Premier League (IPL) is just around the corner. There are many exciting prospects lined up for the tournament. Many local talents have made a name for themselves in the cash-rich league in the past,with this year being no different. Pramod Ananth lists some of the brightest and talented new comers of IPL 2015 from India.

Shreyas Iyer (Delhi Daredevils): After having an excellent domestic season, Shreyas Iyer was picked by the Delhi Daredevils for a whooping Rs. 2.6 crore, which left everyone stunned. His numbers in the the First-Class circuit are excellent. He averages above 50 in his 10 matches for Mumbai, with a highest score of 153. He doesn’t have much experience in the T20 format, which is why him being an unknown quantity in this format can as to the surprise element, which his team can exploit. His numbers in his brief T20 stint in the domestic circuit does not read well, but playing alongside likes of Yuvraj Singh, David Warner and Angelo Mathews will surely help the 20-year old to gain some valuable experience.

KC Cariappa (Kolkata Knight Riders): Cariappa was bought by Kolkata Knight Riders (KKR) out of nowhere. One cannot understand what the franchise saw in him that made them spend Rs. 2.4 crore in the auction from a base price of just Rs. 10 Lakhs. The leg spinner’s purchase was easily the most surprising one in the auction and it raised a few eyebrows. It is said that KC Cariappa used to practice along with the KKR team in the nets, and had a good relationship with their bowling coach Wasim Akram  along with a few other players. He played for Bijapur Bulls in the Karnataka Premier League, where he picked up 11 wickets in six matches. He has also represented Karnataka in the U-16 and U-19 circuits. READ: KC Cariappa: Who is Kolkata Knight Riders mystery spinner?

Kuldeep Yadav (Kolkata Knight Riders): Kuldeep Yadav was one f the players retained by KKR. Kuldeep made a name for himself when he took a hat-trick in the U-19 World Cup against Scotland. This impressed KKR coach Akram, who persuaded his owners to scalp him up. Although Yadav was bought in 2014, he didn’t get to play a single game. He however managed to play a few games in the Champions League T20 (CLT20), where his performance earned him a maiden international call in the series against West Indies at home; he did not get a single match yet again as West Indies pulled out mid-way. His T20 record is phenomenal, which includes a five wicket-haul and an economy rate of 6.76.  He is also handy with the bat low down the order. READ: Kuldeep Yadav feels happy and blessed to be playing Gautam Gambhir at KKR

Sarfaraz Khan (Royal Challengers Bangalore): Despite having just played a handful of games in the First-Class arena, Sarfaraz’s purchase of Rs. 50 Lakhs could just prove out to be bargain. Although his father was surprised with the amount of money paid for his acquire his services, Sarfaraz has the talent and potential to shine. Sarfaraz will play for Royal Challengers Bangalore (RCB) alongside hard-hitting batsmen like Chris Gayle, AB de Villiers and skipper Virat Kohli. Their advice will do the 17-year old boy a world of good. The prospect of facing Mitchell Starc in the nets will surely be a mouth-watering affair for the youngster. READ: Sarfaraz Khan’s father never expected Rs 50 lakhs price

Sheldon Jackson (Kolkata Knight Riders): Sheldon Jackson finished the Ranji Trophy 2014-15 season as the fifth highest run-scorer. The wicket-keeper batsman has not played a game in the IPL despite being on the bench for RCB, after he was signed by them in 2013. KKR managed to secure his services for Rs. 15 lakh.  KKR have a lot of talent and depth in their squad and he might find it difficult to break into the first team with Robin Uthappa the front-runner to keep wickets, but Jackson is handy with the bat and will look to grab hold of his opportunity if and when he gets them. 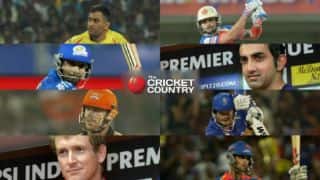