If Smith doesn’t, McCullum will get them, the duo has been usurping the headlines the moment they started to open the innings for GL.

Gujarat Lions wrestled it back in Match 24 of the Indian Premier League (IPL) 2016 against  Rising Pune Supergiants in their own den and emerged victorious by three wickets. The injury to GL’s in-form batsman, Aaron Finch, in the Match 19 against Royal Challengers Bangalore paved way for Dwayne Smith to open the innings for the side along with Brendon McCullum. A move which proved out to be a masterstroke for GL or it wouldn’t be wrong to say a blessing in disguise. Suraj Choudhari reckons Smith and McCullum together are like a ‘Kalis’ which cuts both ways. Live Cricket Scorecard: Rising Pune Supergiants vs Gujarat Lions, IPL 2016, Match 25

If Smith doesn’t, McCullum will get them, the duo has been usurping the headlines the moment they started to open the innings for GL. They have come out all guns blazing and got the ball rolling from the outset and wrecked havoc in the opposition’s mind. As it goes with the saying, a good start is half done; Smith and McCullum have certainly stepped up and got the team to a flying start in three games so far. They are indubitably the pair to watch out for henceforth. If one fails then the other will knock you down. Brendon McCullum, Dwayne Smith help Gujarat Lions power past Rising Pune Supergiants by 3 wickets in IPL 9

Smith and McCullum powered GL’s run-chase with an eccentric start at Pune against the home team. The duo made a mockery of the target of 196 by stitching a match winning opening partnership of 93 in just 49 balls. They went bonkers and took the RPS bowlers for cleaners after a modest first two overs. How often do we see a target this big being hunted down? Very rare, but the start by McCullum and Smith triggered the chase.

They were instrumental in the previous two games as well, in the high-voltage clash against RCB, Smith would have considered himself to be unlucky as he was sent back for 32 after putting an opening stand of 47 in 5.2 overs. In the next game against Delhi Daredevils the opposition were at sixes and seven when these two piled 112 runs at the top inside 11 overs. These are some formidable numbers.

The duo with their belligerent approach set the opposition thinking as they quickly run out of options. The kind of damage they inflict is colossal as they snatch the game from opposition’s grasp right from the start. Both the players are unique in their own ways, but back themselves and play on instincts. Smith majorly relies on his muscle power and has a rare gift of timing which he brings into full use to clear the ropes. He looks to clear the infield which is a key to his success in the powerplay overs. He may not seem technically strong and his style of play may not be pleasing to the eye but has enough to trouble any bowling attack. His forte is his belligerent mindset and muscle power, the ball sails over the boundary when he connects.

McCullum on the other hand has been sensational to watch in the recent times, he takes no time and attacks from the word go. No target is too big when these two are at the crease. McCullum’s strength has been his terrific eye hand coordination. His quick hands and herculean strength can clear any boundary across the globe. He’s well equipped against the short pitched deliveries and the short arm jab allows him to dispatch good length deliveries for priceless boundaries. He is quick on his feet and has the ability improvise along with his patent unorthodox strokes, these qualities make him standout from his imminent peers.

The feeling of watching these two bat together is just rapturous as they give the crowd a run for their money. A bowler is already under pressure when these two are out in the middle; they affect them psychologically which plays a huge role at this level. They are without a doubt the best pair in this IPL and the most explosive one. In three games so far, they have accounted for 252 runs at a staggering average of just above 173, which is gargantuan. If they continue to garner runs in this manner, GL will certainly have an added advantage. As of now, their middle-order has been slightly abrasive. With McCullum and Smith watching their back at the top, they haven’t had any issues so far. 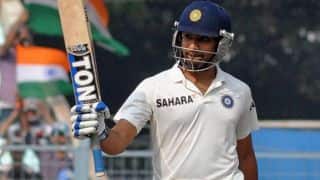