In the mid-1990s, a Malayalee family in Kerala had only two obsessions (which interestingly majority of Indians had): One, watching cricket and two, watching movies.

In the mid-1990s, a Malayalee family in Kerala had only two obsessions (which interestingly majority of Indians had): One, watching cricket and two, watching movies. The family had a little son, who followed the family tradition and developed a liking for cricket and movies. He would watch the God of cricket Sachin Tendulkar bat for hours tirelessly and at the same time, would watch the movie Baby s day out with equal dedication. The tv remote in that household was used to swap only between these two channels; one which showed cricket and the other this Hollywood flick.

The boy, who was unnamed so far for reasons unknown, soon got himself a name. The family combined two of his favourite passions to coin his name: Sachin Baby! The young boy grew up playing the game and watching the movie day in and day out. Such was the influence of these two passions on him that he grew up to be a cricketer with a baby face. And when the Indian Premier League (IPL) a desi blend of cricket and movies happened to him, Baby could not be happier.

To him, IPL was the marriage of two of his greatest passions. He got to live his dream when Rajasthan Royals (RR) picked him, but his wait for a proper day-out remained a dream. In 2016, Royal Challengers Bangalore (RCB) bought him and this turned out to be the watershed moment for the baby. He is finally living up to his name now after a couple of decent outings! Looking at it, the RCB have decided to remake his favourite movie by casting him in the title role. It is learnt that it is Virat Kohli s decision and he himself will direct it. A certain Sarfaraz Khan is unhappy with this decision, as he has lost out on two fronts to the baby . First, Sachin Baby replaced him in the side and now, he has edged past Sarfaraz, who too is baby-faced, to bag the role. JKCA denies NOC to Ranji pacer to play in England 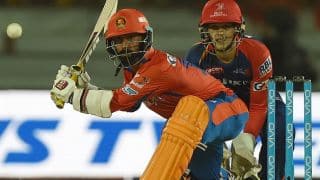