No Andre Russell and an out–of-form Yusuf Pathan meant little firepower in the middle-order and therefore the strategy to load the top-order with explosives arrived.

The term ‘X factor’ is ambiguous. In mathematics, ‘x’ represents the unknown. In sports, coaches use the word every now and then. In cricket, let us go with the Cambridge definition: a quality that you cannot describe that makes someone very special. Kolkata Knight Riders (KKR) on Friday bowed out to their age-old nemesis Mumbai Indians (MI) to end their Indian Premier League (IPL) 2017 campaign. Summing up KKR’s campaign, it was a good team effort plagued by injuries, off form, bad luck and a backfiring innovation. And they lacked the X-fact0r.

Luck or let us say the lack of X-factor

A recent report in Indian Express stated that KKR travelled the most distance this IPL. They travelled over 18,500 km in a month-and-half, which is quite a contrast to Delhi Daredevils (DD), who travelled nearly half. The next most travelled team was Sunrisers Hyderabad (SRH), covering a distance of just over 13,000 km. Fatigue is a part and parcel of the modern sport but a level playing ground is a least expectation.

However, let us move on to the real reasons…

A chunk of Rising Pune Supergiant’s (RPS) success’ credit goes to Ben Stokes’ show in the league stages. Andre Russell could have done the same. Unfortunately, the Jamaican’s absence due to ban affected KKR big time. They still did well to finish third in the tournament.

No Russell and an out–of-form Yusuf meant little firepower in the middle-order and therefore the strategy to load the top-order with explosives arrived.

Kolkata found an opener in Chris Lynn. In their opening encounter against Gujarat Lions (GL) at Rajkot, KKR made a joke of the 184-run chase. An unbeaten 184-run opening stand between Lynn and skipper Gautam Gambhir saw KKR start the tournament with authority.

KKR’s strategy worked well and they were most successful side in utilising Powerplay this season, scoring at 9.39 per over. Unfortunately, they had collapsed to 25 for 3 in Powerplay in the Qualifier 2 against MI and could not recover.

Lynn’s injury  opened the doors for Sunil Narine the opener. A move hailed as a masterstroke but often criticised. It made a lot of sense to use Narine’s batting at the top, as his style of batting would have yielded little results at the death with the field spread. Even a 10-ball 20 would not have hurt the side, as there was plenty of batting to follow.

After Lynn came back, KKR had extra options but they chose to continue with Narine with Lynn as his partner. Probably, they got awestruck by what happened against Royal Challengers Bangalore (RCB) at Chinnaswamy. Narine struck a record 15-ball fifty and KKR registered the record Powerplay score of 105.

The strategy soon backfired, as smarter teams like Mumbai knew the trick to contain someone like Narine. Worse, Robin Uthappa, who had found home at No.3 before his injury, returned at No.4. He scored four runs from as many innings post his return. Gambhir too could not replicate his opening form at No.3.

Manish Pandey, who started the tournament with a bang batting at No.4, could do little as a late-order finisher. There was chaos in the line-up but there is little reason on why Gambhir and Uthappa failed with the bat when pushed down the order.

Either of Narine, Colin de Grandhomme or Chris Woakes had to fill up Russell’s shoes. Narine’s strike rate with the bat was over 170 but he did not get the desired number of wickets, though bowled with an economy of under seven. De Grandhomme did little justice to entrusted faith and the opportunities he got over Shakib Al Hasan and Woakes was used mainly as a bowler.

Kolkata for a major part of the tournament gave stiff competition to Mumbai at the top of the table. It is a pity that they slumped to the fourth spot by the end of the league stages. However, they remained in the hunt. A win at Eden Gardens against Mumbai in their last league game could have meant a top finish, and had that happened they would have entered the Qualifier 1.

They have nothing to blame here. While teams like Pune peaked at the right time, KKR began to lose plot during the end stages. Injuries to peaking players did not help either.

Lynn, after a glittering start, fell prey to a shoulder injury that has been threatening his career since start. He returned almost a month later. Uthappa’s last five scores before injury read — 72, 11, 87, 59 and 53. On return, he managed 0, 2, 1 and 1.

Nathan Coulter-Nile claimed 11 wickets from his first six games before being struck on the grille off a Dan Christian delivery. He returned to action after a two-week hiatus.

KKR’s strength historically lied in spin. The re-laid Eden Gardens surface assisted pacers more, which was evident from the first game played on it in September 2016 — The India-New Zealand second Test.

KKR had to re-think their bowling plans and they made smart moves in the auction by drafting in Trent Boult and Woakes. The masterstroke however was getting in Coulter-Nile.

Pacers took the centre stage and from Umesh to Woakes to Coulter-Nile, everyone bowled well. Boult was a disappointment but he was not the luckiest as well.

Coulter-Nile won three Man-of-the-Match awards from his eight games. KKR would have certainly benefitted had the Western Australian played more.

KKR registered two of the biggest wins this season — first, their opening encounter against GL and the other scripted by their pacers when they shot out RCB for a record low 49.

KKR have seldom relied on star power and they continued this trend. Also, unlike several other sides, they did not bank on conditions and home advantage. Until the playoffs, they had won four home games and four away games.

The team benefitted from the positivity emitted from their skipper. Gambhir continued to lead from the front, scoring almost 500 runs. He did not hesitate to experiment and even at crunch moments, went down fighting. KKR and Gambhir, in particular, won hearts as well. Gambhir’s gestures towards the family of martyred CRPF jawans won him plaudits from all corners.

For the side, they have built a good pace attack that complements their spin armoury. If Russell comes back, this side will be amongst the best.

With all players going back to the auction pool, it will be tough for KKR to retain the crux of the side. A year is a long time and form will be an indicator before the KKR think-tank chalk out their preferences.

Gambhir is not getting younger and by the next IPL, he will be 36. If he continues to score runs in domestic cricket, there is little doubt that KKR will look beyond the southpaw. And look ahead to build the side around him.

Suvajit Mustafi consumes cricket for lunch, fiction for dinner and munches numerous other snacks throughout the day. Yes, a jack of several trades, all Suvajit dreamt of was being India’s World Cup winning skipper but ended up being a sports writer, author, screenwriter, director, copywriter, graphic designer, sports marketer, strategist, entrepreneur, philosopher and traveller. Donning so many hats, it’s cricket which gives him the ultimate high and where he finds solace. He can be followed at @RibsGully [Twitter] and rivu7 [Facebook].
First Published on May 22, 2017 8:30 AM IST
Last updated on May 22, 2017 8:30 AM IST
TOPICS:
Gautam Gambhir Indian Premier League Indian Premier League 2017 IPL IPL 10 IPL 2017 KKR Kolkata Knight Riders
SERIES:
Indian Premier League, 2017 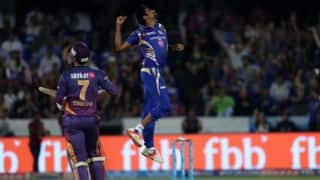