The victory also meant KKR s first against GL in IPL as their previous meetings in IPL 2016 ended in GL's favour.

Riding on the batting heroics of Gautam Gambhir and Chris Lynn, Kolkata Knight Riders (KKR) registered their 1st win in the 10th edition of Indian Premier League (IPL) by beating Gujarat Lions (GL) by 10 wickets. Gambhir (76 off 48)* and Lynn (93 off 41)* did not let the cheerleaders rest from the word go, chasing 184 to win as GL had posted 183 for 4 after being asked to bat first. The victory also meant KKR s first against GL in IPL as their previous meetings in IPL 2016 ended in GL’s favour. With this record-breaking victory by KKR, Abhishek Kumar presents some interesting statistical highlights from the match.

1st 10-wicket win for KKR and 9th overall. The last such instance also happened at Rajkot when Sunrisers Hyderabad (SRH) beat GL by chasing 136 in 2016. KKR also became the 9th team do so.

184 is now the highest total in T20 to be chased successfully with 10 wickets remaining. Previous record was by Perth Scorchers against Melbourne Renegades by chasing 171 without losing any wicket in December 2015 at Melbourne.

4,166 runs for Suresh Raina in IPL the most by any player in the history of the tournament. Raina went past Virat Kohli‘s tally of 4,110 runs.

30th fifty-plus score for Raina in IPL the joint 3rd-most by any batsman in the tournament. He also became the 5th batsman to have 30 or more fifty-plus scores in IPL after David Warner (34), Gambhir (32), Kohli (30) and Rohit Sharma (30).

12 fours by Gambhir during his unbeaten knock of 76 runs. This is the most number of fours hit by a KKR player in a single innings in IPL. Previous record was of 11 fours by Sourav Ganguly in 2008 against Deccan Chargers.

184 runs for 1st wicket stand by Gambhir and Lynn the highest for opening partnership in IPL history. Previous record was of 167 by Chris Gayle and Tillakaratne Dilshan in 2013 against Pune Warriors. Overall, this was 6th highest opening stand in T20s.

19 balls taken by Lynn to complete his fifty, the joint-2nd fastest fifty by a KKR player in IPL. Andre Russell also scored 19-ball fifty in 2015 against Kings XI Punjab. The record is 15 balls by Yusuf Pathan in 2014 against Sunrisers Hyderabad.

8 sixes hit by Lynn, the joint 2nd-most by a batsman in IPL in an innings of below 100 runs scored. The record is of 9 by Glenn Maxwell during his knock of 95 runs against SRH for Kings XI Punjab in 2014.

0 number of bigger total by a team at Rajkot than KKR’s 184. Previous highest total in IPL at Rajkot was 182 by GL against Royal Challengers Bangalore in 2016.

6th instance of 150 runs or above opening partnership in IPL. Previous such instance happened in 2013 between Gayle and Tillakaratne Dilshan.

32nd fifty-plus score for Gambhir in IPL, the most by an Indian player and 2nd-most overall after David Warner (34).

0 number of players to have more fifties than Gambhir without any hundred. Gambhir is yet to score a century in IPL. The second player after Gambhir with most fifties without hundred in IPL is Shikhar Dhawan with 25 fifties. 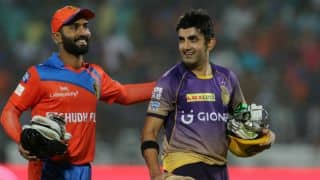 IPL 2017: Dinesh Karthik feels Gujarat Lions did not play up to the mark against Kolkata Knight Riders in Match 3 of IPL 10