A look at the phases from CSK's six-wicket win over SRH at Chepauk on Tuesday night.

Here are the phases from the contest that proved decisive

Jonny Bairstow has left quite an impression in his maiden IPL stint. Opening the innings alongside David Warner, the Englishman formed a formidable opening partnership setting base of several SRH victories. Tuesday night’s clash against CSK was his final innings of the innings but and he would have been determined to make it count. However, veteran Harbhajan Singh spoiled his season farewell having him out caught behind for a two-ball duck. However, Bairstow must have been proud of his performance, hitting 445 runs from 10 innings at a staggering average of 55.62. He left early to attend England’s World Cup 2019 training camp and SRH would be looking forward to welcoming him for next year and expect a repeat of his 2019 exploits.

Before Tuesday night, Manish Pandey had managed 54 runs across five innings this IPL. A part of it had to do with the bulk of scoring and ball consumed by SRH opening pair leaving Pandey and others in the middle order little opportunity to settle in and score. A part of it had to do with his own form. Against CSK, he was promoted to bat at No. 3 and he repaid the faith hitting an unbeaten 83 off 49 with seven fours and three sixes. His return to form couldn’t have come at the right time for SRH who will now be without Bairstow and eventually David Warner – both to link up with their respective national teams for World Cup preparations. Pandey came to bat at when SRH were 5/1 in 1.3 overs and sent down an ominous warning to CSK with a first-ball four off Harbhajan. At one stage he had raced to 27 off 12 as SRH collected 54/1 in Powerplay overs.

With Pandey’s blazing start, Warner settled down and didn’t take the role of the aggressor. He though struck yet another fifty this season his 43rd of IPL career but had consumed 39 deliveries to do that. His partner Pandey had reached fifty of his own off just 25 deliveries. But the pair had added 115 runs between them and at 118/2 in 13.2 overs, the stage was set for a late flourish. However, the dismissal of Warner by Harbhajan didn’t allow the late acceleration SRH would have wanted. From their last five overs, came just 41 runs. Not that they lost wicket either- just a lone wicket and that too in the 19th over.

In their chase, CSK failed to score off their first 10 deliveries. To make matters complicated, they lost Faf du Plessis to a run-out in the third over with just three runs to show for. By four overs, they were 16/1. And in 5, 27/1. Clearly, they were struggling. Meanwhile, Suresh Raina, mirroring the start, by his SRH counterpart Pandey (both batted at no. 3), began opened his account with a firs-ball four. But he saved the assault for Sandeep Sharma who came on to bowl the final over of the Powerplay. SRH captain Bhuvneshwar Kumar must have slotted him in considering his reputation of picking wickets in Powerplay overs. Considering the start CSK had endured, the prospect was tempting. But Raina threw spanner in the works belting him for four fours and a six to cream 22 runs off his first over. CSK scored 49/1 in six overs which made for a much better reading that the start they had.

Watson proves his worth

Questions were being raised over CSK’s continued faith in Shane Watson as an opener despite him managing 147 runs across 10 innings this season. Clearly, his struggles at the top were preventing the defending champions from laying solid platform. In chase of 175, Watson began the innings playing out a maiden first over, bowled by Bhuvneshwar Kumar. Thanks to Raina, CSK were able to control the damage in the Powerplay overs. To some extent, Watson had also made up for his slow start with a six and four off Khaleel Ahmed in the fifth over. SRH was the team against whom he struck a century in the final of IPL 2018 – an innings that proved decisive. He started slow 37 off 31 by the time 11th over was finished. But exploded immediately afterwards. Again, it was poor Sandeep who took the brunt with two fours and a six as the Australian struck his first fifty of the season. He then dented Rashid Khan’s confidence with a four and six off consecutive deliveries. When he was dismissed, he had struck 96 with nine fours and six sixes an innings enough to maintain CSK’s unbeaten run this season. 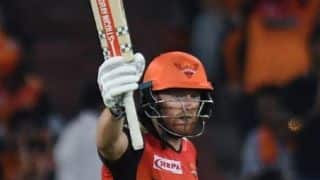