With this 39-run win over SRH, Delhi completed a hat-trick of wins to move to second place.

From 101/2 to 116 all out. Sunrisers Hyderabad lost the plot and lost the match as the pace trio of Kagiso Rabada, Keemo Paul and Chris Morris powered Delhi Capitals to a 39-run win in game 30 of IPL 2019 at the Rajiv Gandhi International Stadium in Hyderabad on Sunday.

With this performance, Delhi Capitals completed a hat-trick of wins and moved to second spot on the points table.

Here are the five talking points from the SRH versus DC match:

Playing his first competitive cricket match since February 28, Khaleel Ahmed made a strong comeback with three wickets for Sunrisers. The left-arm pacer removed Prithvi Shaw and Shikhar Dhawan in his first spell and later added Rishabh Pant to finish with 3/30 in his four overs.

Noticable was Khaleed’s pace and bounce in his IPL return, which accounted for Dhawan. Khaleel bowled a terrific bouncer that hurried on Dhawan and drew a top edge that settled in the fine leg fielder’s hands. Earlier, a delivery that sat up for Shaw found the edge to Jonny Bairstow.

This return augurs well for Sunrisers as they seek to get their flagging IPL campaign back on track.

Abhishek Sharma, a left-arm spin bowling allrounder, was drafted into the Sunrisers team for his first game this season. The former India Under-19 World Cup-winner was given the ball for the eighth over of Delhi’s innings, with New Zealander Colin Munro going strong on 32 off 20 deliveries.

It was a bold move, but one that paid off. After four singles, Munro thumped Abhishek for six over long-on. Then the teenager ambled in and bowled a leg-cutter, far wider of the stumps, which lured Munro out of his crease to be caught behind.

The delivery was a gem: it straightened after pitching and left-handed Munro, having charged out, was deceived by the slowness of the ball and the way it spun away.

It was a massive strike, but Kane Williamson did not bowl the 18-year-old Abhishek again.

Less than 24 hours before the BCCI selection committee meets to pick India’s World Cup squad, Rishabh Pant produced another innings that has not enhanced his reputation.

Will this run of inconsistent scores impact Pant’s World Cup chances? We will know in a few hours.

Once again, the pair of Jonny Bairstow and David Warner combined to give SRH a good start in pursuit of 156. Bairstow hit 41 off 31 balls and Warner top-scored with 51 from 47 as Sunrisers were given an opening stand of 72 off 59 balls.

How did this happen?

Leading the way in SRH’s dramatic collapse was West Indies’ allrounder Paul. His slow cuttters and variations flummoxed the Hyderabad batsmen, who had to try and make shots out of nowhere which led to their downfall.

Bairstow was the first to fall to Paul, miscuing a shot to the deep. Then Williamson went, driving a slower ball to mid-off where Rabada took his second catch.

Ricky Bhui went next, bowled by a delivery from Paul that hit the seam and moved a touch. Paul pocketed 3/17 in four overs, before Rabada ran though the rest.

With Sunrisers needing 52 from 24 balls, Rabada took out Warner and Vijay Shankar in consecutive deliveries and then Morris grabbed three wickets in the 18th over. Rabada finished with 4/22. 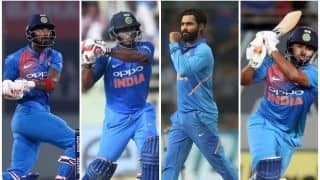