While Paul and Morris scalped three wickets, Rabada returned with the figures of 4/22 as SRH collapsed despite Jonny Bairstow s half-century and David Warner s 41. The pace-bowling duo, alongside Morris, ran through the SRH batting line-up as the home team imploded, losing their last eight wickets for 15 runs.

The likes of Kane Williamson, Ricky Bhui, Vijay Shankar, Deepak Hooda and Abhishek Sharma scored 3, 7, 1, 3 and 2 respectively as SRH lost the plot in the chase of 156 on their homeground. DC, who completed a hat-trick of wins, moved to the second spot in points table.

Earlier, after electing to bowl, Khaleel Ahmed‘s three-wicket haul helped SRH restrict DC for 155/7, a target which eventually became out of reach for the Williamson-led unit. (IPL 2019, SRH vs DC: AS IT HAPPENED)

provided SRH with a bright start as Prithvi Shaw suffered yet another failure and Shikhar Dhawan failed to take off from where he had left in the previous game. While Shaw scored 4 runs, Dhawan perished for 7 as DC were reduced to 20/2 in the fourth over.

Colin Munro and DC skipper Shreyas Iyer started to rebuild the innings, with the New Zealander playing the role of an aggressor. But Abhishek Sharma broke the 49-run partnership as he dismissed the left-hander for 40.

Iyer was then joined by Rishabh Pant. The two put up a 56-run stand but just when it seemed like the Indian duo will go after SRH bowlers, Bhuvneshwar Kumar dismissed Iyer to claim his 100th IPL wicket and Khaleel sent Pant packing to take his third wicket. Iyer and Pant got out in space of two runs. (FULL POINTS TABLE)

Chris Morris too could not do much with the bat as Rashid Khan got the South African out for 4 to left DC reeling at 133/6. While Axar Patel scored 14 and Keemo Paul added 7, DC were restricted to 155/7. 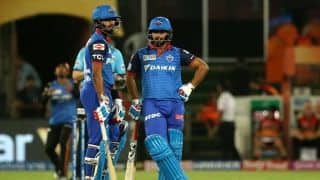