The highlights of game 22 of IPL 2019, which saw KXIP beat SRH by six wickets on Sunday.

The result put Punjab at third on the IPL points table and Hyderabad at fourth.

Here are the major talking points from the match:

The success of Hyderabad in the first two weeks of IPL 2019 had been largely dependant on the starts provided by David Warner and Jonny Bairstow. In the two games that their partnerships have been broken early, the team has lost. On Sunday night, R Ashwin smartly introduced spin for the second over of the game in the form of the recalled Mujeeb Ur Rahman. (VIDEO: KL Rahul takes KXIP to third spot)

Stats tell us that Bairstow has often fallen to spin early in T20s – in particular, to legspin – and this trend continued. Off Mujeeb’s fourth delivery, Bairstow flicked uppishly to midwicket where Ashwin took a smart diving catch. This was the sixth time in a row that Bairstow had fallen to spin this season. Hyderabad were 7/1.

While they did well to score 100 off their final ten overs, Hyderabad were kept quiet in the first half. They made 50 for the loss of Bairstow in their first ten overs, with Warner kept to 20 from 30 balls by the mid-innings mark. (READ: There is scope for improvement, says R Ashwin)

Credit for this goes to Mujeeb, Ankit Rajpoot and Mohammed Shami. The trio was very disciplined, with Shami and Rajpoot particularly accurate against Warner who was left to push the ball for singles. Repeatedly denied the cut and pull by KXIP’s pace pair, Warner struggled for momentum. On a big ground, Warner managed one four in ten overs.

In the end result, this proved a very vital passage of play.

Mayank Agarwal made 55 off 43 balls to help Punjab chase a target of 151, and his peppy innings contained some stunning shots. Whenever he saw a fraction of width, Agarwal latched on and smashed the ball. (READ: KL Rahul’s 71* trumps David Warner’s 70*)

With 37 required off 27 balls, and with nine wickets left, Agarwal mistimed a shot off a short delivery from Bhuvneshwar Kumar. The ball went high in the air and came down in Yusuf Pathan’s hands, only for the fielder to drop it.

Agarwal was on 40 at the time and went on to score 15 more – off just seven deliveries. That reprieve and the brief passage that followed allowed Agarwal to hasten Punjab’s win.

With one fifty before this game, KL Rahul had not lived up to expectations. His second fifty also came when chasing, which gave him plenty of satisfaction after he took his team home.

Once Chris Gayle fell early, Rahul batted himself in while Agarwal played his shots. After ten over, Rahul was 26 off 24 balls. Then in the 11th over he targeted Siddarth Kaul and hit him for two fours and a six to move to 40 from 30. At the end of the 12th over he was 50 off 34, having hit Mohammad Nabi for two fours. There on, Rahul coolly worked the ball for ones and twos and remained 71 not out off 53 balls.

A collapse of three wickets for eight runs threatened to undo the hard work, but Rahul did not lose his cool. 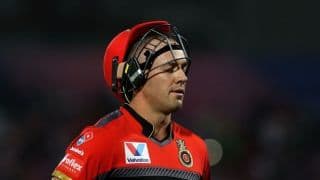