In the 151-run chase, KXIP lost Chris Gayle early. However, the Karnataka duo of Rahul and Mayank Agarwal put up a 114-run partnership for the second wicket before Sandeep Sharma got Mayank out for 55 in the 18th over. (IPL 2019, KXIP vs SRH: AS IT HAPPENED)

While there was a middle-order wobble following Mayank’s dismissal as SRH scalped three quick wickets, Rahul made sure KXIP cross the finish line with six wickets in hand and a ball to spare. The win also helped KXIP to continue their good run of form at their homeground.

Earlier, Warner scored his seventh successive fifty-plus score against KXIP as SRH posted 150/4 after being asked to bat first.

The Australian scored an unbeaten 70 off 62 balls as the visitors managed to post 150 runs on the board, with Deepak Hooda, playing a three-ball 14-run cameo at the end.

Mujeeb Ur Rahman struck early to give KXIP their first breakthrough. The Afghanistan spinner dismissed Jonny Bairstow for one in the second over as skipper R Ashwin took a good low catch at mid-wicket. (FULL POINTS TABLE)

While Vijay Shankar managed to hit a four off his second ball, he and Warner failed to up the ante in the powerplay, with the latter scoring only 9 from the 17 balls he faced as KXIP kept SRH in check, allowing them to score only 27 runs in the first six overs.

The two added 49 runs together for the second wicket before Ashwin dismissed Vijay for 26 in the 11th over. Ashwin was involved in another SRH wicket as he ran Mohammad Nabi out for 12 off his own bowling.

KXIP would have sent Manish Pandey packing soon after Nabi s fall. But they did not review the on-field decision after a Sam Curran delivery hit the Indian batsman onto the pads. The replays showed that Pandey, who was on two then, would have been out LBW had KXIP opted for a review. Pandey could eventually score 19 before being dismissed by Mohammed Shami.

While at one point it looked difficult that SRH would score 150 but Hooda, who replaced Pandey in the middle in the last over, hit two fours and a six off Shami to help SRH reach the 150-run mark. 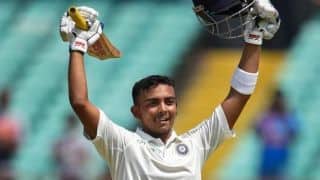 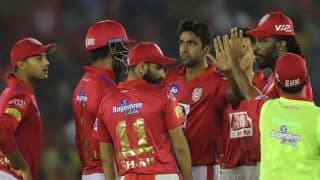