Mumbai were scratchy for the major part of their innings. They made nine runs off the first three overs for the loss of a wicket before Suryakumar broke the shackles. He struck consecutive fours off Shardul Thakur before belting three more of them off successive deliveries from Deepak Chahar to race to 24 off 12. After three quiet overs, Mumbai were on song before again slowing down. They had scored a run-a-ball 50 when Yuvraj departed in the ninth over. That followed a smart partnership worth 62 runs between Suryakumar and Krunal Pandya. Suryakumar scored 59 off 43 with eight fours and a six while Krunal capitalised on a dropped catch to hit 42 off 32.

Mumbai made 93/3 in 15 overs and with wickets in hand, the stage was perfect for someone of the likes of Hardik Pandya or Kieron Pollard to explode. Suryakumar and Krunal had done a decent job at preventing a collapse. They departed in successive overs leaving MI 125/5 in 18 overs not a very promising total. However, Hardik and Pollard plundered 45runs off the final 12 deliveries to push MI’s total to a competitive 170/5. The assault began from the first delivery of 19th over when Shardul bowled a length delivery and Hardik sent it soaring over deep midwicket boundary. From that over, 16 runs were added to the total. Dwayne Bravo bowled the final over and was clubbed three sixes and a four as he leaked 29 runs. Hardik finished on 25 off 8 while Pollard struck 7-ball 17.

CSK captain MS Dhoni said they missed Lungi Ngidi at the Wankhede. Reason? A paceman who could exploit the bounce that was on offer. Demonstration of that was given by Jason Behrendorff as he struck in the first over with a peach of a delivery to have opener Ambati Rayudu out caught behind for a first-ball duck. Suresh Raina seemed to have found a way to deal with him as he smashed a six and two successive fours off him but then holed out off the Australian to Pollard who completed a stunning catch. Behrendorff’s first three overs resulted in 17 runs and two wickets as CSK scored 34/3 in Powerplay

How can we not talk about what Pollard did? He has a knack of taking breath-taking catches and Wednesday night was yet another instance of exactly that. Raina had begun in aggressive fashion as he belted two straight fours off Behrendorff to settle some nerves. He then went after a short delivery sending it high towards the sweeper cover region. Pollard had been stationed there and he slightly misjudged the catch as he ran forward but in an instant lept to grab the ball one-handed, tumble and nonchalantly got up on his feet to acknowledge the crowd. The look on Raina’s face was enough evidence of what Pollard had pulled off.

CSK also were going along at a similar pace as MI during their innings. They needed 84 off 36 deliveries with seven wickets remaining. It was a difficult ask but not impossible considering what their opponents had managed in their final two overs. MS Dhoni and a well-set Kedar Jadhav were at the crease. Rohit brought back Hardik who had bowled two overs for just six runs. He picked two wickets on return. He first outsmarted Dhoni having watched him step out by dropping short. Dhoni was cramped for room and ended up being caught at square leg. Later in the over, he induced an edge from Ravindra Jadeja to all but end hopes of the visitors as they slipped from 87/3 to 89/5. Hardik added one more wicket to his name, ending with 3/20 from four overs. 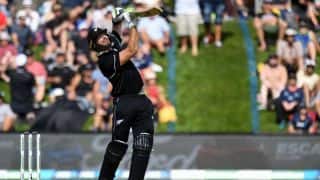