CSK held their nerve in an eight-run win over Rajasthan to go top of the IPL leaderboard.

Game 12 of the 2019 IPL saw hosts Chennai Super Kings beat Rajasthan Royals by eight runs on Sunday night for their third win in a row, which put them on top of the points table. (READ: Dhoni, Bravo keep Chennai s winning streak intact)

Here are the key factors for CSK’s win:

He’s not the IPL’s all-time leading run-getter without reason, and Suresh Raina showed his versatility in Chennai’s run chase which was rocked by three early wickets. He had to buckle down and did just that while putting a price on his wicket. Raina defended and worked the ball for single and didn’t hit a boundary until his 15th ball faced.

That shot past backward point saw Raina accelerate, going from 8 off 15 balls to 27 off 24 with a big six off Shreyas Gopal the highlight.

He was bowled by Jaydev Unadkat for 36 off 32 balls in the 14th over, having played a big role in reviving CSK from 27/3.

Think for a moment and let it sink in that MS Dhoni‘s 75 not out is his second-highest score in the IPL’s 12-year existence. Cometh the hour, cometh the man and all that. Dhoni walked out to join Raina with CSK 27/3 in the fifth over. Within no time, he watched the ball hit the stumps but the bails remain intact. He huffed, he puffed, he blocked and he was beaten. (READ: Ajinkya Rahane fined Rs 12 lakh for slow over-rate)

His first 17 deliveries faced comprised one and twos. He lost Raina in the 14th over, didn’t hit a six until his 38th delivery faced. He finished with four in all, his innings of 75* needing 46 balls. In CSK’s final over, Dhoni hit three sixes off Jaydev Unadkat in an over that cost 28 runs.

Of the 60 runs CSK looted in the last three overs of their innings, 35 came to Dhoni.

For the third straight game, pace bowler Deepak Chahar bowled his four overs in a row upfront. The result was figures of 4-1-20-2. As in the last two games, Chahar ran in and bowled accurately and successfully inside the Powerplay to give CSK early success.

He got Ajinkya Rahane for a duck second ball in a wicket-maiden opening over, had Sanju Samson caught at cover in his second and bowled 12 dot balls in all.

In a team reliant on spin and Dwayne Bravo, Chahar has gone about his business in the IPL very efficiently.

Chennai dropped Harbhajan Singh for this match and played the New Zealand left-arm spinner Mitchell Santner, who ended up conceding 26 runs in two wicketless overs. Ravindra Jadeja went for 23 in his two. That left Imran Tahir‘s four overs as pivotal, and the South Africa legspinner did was very effective.

He conceded just 23 runs and accounted for Rahul Tripathi and Steve Smith, the pair that had threatened damage. On a night where dew was a big factor, Tahir kept his control and dried up the boundaries with his accuracy.

Bravo keeps his wits about him

Rajasthan needed 12 runs off the last over of the game. Dew was a factor, with both teams repeatedly rubbing the ball with towels all through the match.

Dwayne Bravo rubbed it down and ran in, then had the threatening Jorfa Archer caught at cover first ball of the over for 46 off 26 balls. A dot, leg bye and single followed. Off the fourth ball, Bravo had Gopal slicing to Tahir at third man and the game was over. It needed a clever practioner to bowl at the death with just 12 overs to defend, and Dhoni’s pick proved correct. 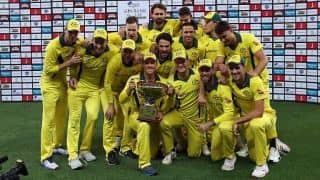