The incident took place during the innings break when Llong damaged the door by kicking at it and shouted at people in the room.

After batsmen and bowlers, it s now the turn of the umpires to lose their cool in the Indian Premier League (IPL 2019). Case in question is regarding England official Nigel Llong, who has landed himself in controversy following the ruckus he created in the umpires room at the M Chinnaswamy Stadium during Royal Challengers Bangalore’s last match against Sunrisers Hyderabad on Saturday.

According to a report in the Deccan Herald on Monday, the incident, which has now surfaced, took place during the innings break when Llong, who is on the International Cricket Council‘s Elite Panel of umpires, damaged the door by kicking at it and shouted at people in the room. The Karnataka State Cricket Association (KSCA) officials confirmed the news and a report will be sent to the BCCI s Committee of Administrators for appropriate action .

Llong was visibly peeved after a senior RCB player (Virat Kohli s name doing the rounds) advised him to be focussed after the Englishman wrongly adjudged Umesh Yadav s delivery as a no-ball for overstepping. The sequence of events was replayed on the giant screen and when Umesh approached Llong, he sternly told him off while appearing to say, I know my job .

KSCA spokesperson Vinay Mruthyunjaya said the association has not hushed up the matter since there was a delay in reporting it to the BCCI. The match got over late on Saturday and Sunday (the office) was closed for us. We took up the issue today and decided to report it to the higher authorities and subsequently, we have written to the BCCI, ICC and the IPL Governing Council, Mruthyunjaya said.

R Sudhakar Rao, the secretary of the KSCA termed the situation unfortunate. It was an unfortunate incident. As the state association, we are duty-bound to report it. We are writing to the COA today, he informed.

Reportedly, Llong has paid KSCA Rs. 5,000 for the damages caused.

The incident has left many Indian umpires furious over the light treatment meted out at Llong and many have questioned the double standards when it comes to their actions. I can tell you with 100 per cent surety that if an Indian umpire had behaved like this, he would have been banned for life the next day, said an umpire on the BCCI panel.

The BCCI umpire drew comparison between how S Ravi was humiliated for not spotting Lasith Malinga s no-ball against RCB and how Llong has been let off for wrongly calling Umesh’s delivery.

There are clear double standards in play here. I heard he had been made to pay, but it s not about the money. It s the behaviour of an Elite Panel umpire that s a cause of concern for us. We are supposed to be controlling the behaviour of players, but if we only behave like this, then what behaviour can we expect from them? he asked.

Kicking of association property is a more serious offence of a non-cricketing nature. Given that match officials are answerable to a Code of Conduct of their own, it will be interesting to see whether any action is taken against Llong, who is scheduled to officiate in the IPL 2019 final at the Rajiv Gandhi International Stadium in Hyderabad on May 12 (Sunday). 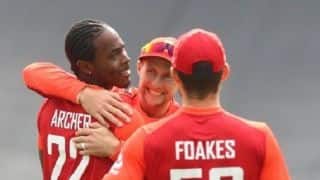