The Day 1 of the IPL 7 auction came with many surprises. Here are the top 10.

The first day of the Indian Premier League (IPL) 2014 auction sprang surprises for many. While there are couple of marquee players who went unsold, there were a few who fetched bidding that seems a little surprising. Also to be mentioned were those players who were key players for some of the franchises till last season, but on the first day, they found no buyers. Yuvraj Singh, Dinesh Karthik and Kevin Pietersen topped the table for the highest selling price, whereas there were some big misses.

Let’s take a look at the top 10 eye-popping moments of the first day of the IPL 7 auction, held in Bangalore:

Yuvraj’s career graph is on a downslide. He has not only been away from the Indian Test side for sometime but his exclusion from the ODI side for the tour of New Zealand can also not be ignored. His form in international cricket hasn’t been great either. In the sixth edition of the IPL, he had an ordinary run with 238 runs in 13 innings at an average of 19.83. But despite all this, the star all-rounder fetched the biggest bid of the day, starting from a base price of Rs 2 crores he was sold at a whopping amount of Rs 14 crores to the Royal Challengers Bangalore (RCB). His addition is certainly a good move for the Virat Kohli-led side, but the price does surprise one when it is of a player who is on a downward spiral.

2. Dinesh Karthik’s bidding goes from base price of Rs 2 crores to Rs 12.5 crores!

Ever since Dinesh Karthik finished the IPL 2013 as the seventh highest run-getter, he was considered among the key players for the winning Mumbai Indians’ side. But he wasn’t retained and was thrown in the auction pool, and on the first day, the IPL franchises frantically went on bidding for him. Delhi Daredevils surprised everyone with a bid of Rs 10.5 crores, which was bettered by Kolkata Knight Riders as they put Rs 12.5 crores. Certainly a huge amount for someone who is presently out of national side reckoning.

India discards Yusuf Pathan and Piyush Chawla may be nowhere close to a national recall, but the IPL sides think differently. They earned Rs 3.25 crores and Rs 4.25 crores respectively in the auction on the first day. In the 2012 season, Pathan managed 194 runs in 17 matches while in the 2013 edition, he played 16 games and scored 332 runs.

Chawla hasn’t been great either. In 2012 edition he played 16 matches and took as many wickets, the record in the next edition was 11 wickets in 16 matches.

The top-ranked Test bowler Vernon Philander gets no buyers as he remained unsold on the first day, but Chennai Super Kings found a perfect choice in the Indian veteran Ashish Nehra, who was bought for Rs 2 crore. Also, Jaydev Unadkat, who has so far struggled to make most of the opportunities provided in international cricket, was sold for Rs 2.8 crore!

Despite his red hot form against India in the ongoing series, Ross Taylor failed to find a buyer. Mahela Jaywardene, who was Delhi Daredevils’ captain and led them in a disastrous run last season, perhaps bore the brunt of it. South African Twenty20 specialist Richard Levi, who holds the record of fastest century in T20 Internationals, too was ignored.

6. Key players coming into auction towards the end of the day

Some of the key New Zealand players such as James Franklin (once Mumbai Indians’ frontline players), pacer Mitchell McClenaghan, pace sensation Adam Milne and a few more came into the auction quite late in the day. Also, there were budget players, like Rayad Emrit, who failed to find buyers.

7. Did some players set high base price?

England all-rounder Samit Patel, Imran Tahir, Rikki Clarke and Australian speedster Pat Cummins and Rob Quiney indeed set a high base price, and perhaps that was the sole reason why teams did not opt for them. Also, there was a talk that the IPL franchises were saving money for the second day of the auction, when the uncapped players will be up for grabs.

8. No interest in England and Sri Lankan cricketers

The likes of Nuwan Kulasekara, Sachithra Senanayake, Rangana Herath, Ian Bell, Craig Kieswetter and Alex Hales did not find any buyers, and the ignorance towards the cricketers from England and Sri Lanka could be seen on the first day.

9. Richard Madley missing out on calls

Auctioneer Richard Madley missed out on hearing the franchises’ calls and signals while the bidding process was going on for several players, the important one being during Yuvraj Singh’s auction. As Madley announced Yuvraj as a player for the Royal Challengers Bangalore, there seemed to be confusion. Kolkata Knight Riders had made their bid too, but Madley had missed.

While there were many new faces in the auction list on the first day, there were the veterans such as Hemang Badani, Wasim Jaffer, Jehan Mubarak, Neil McKenzie and many more who’s presence surprised a few. 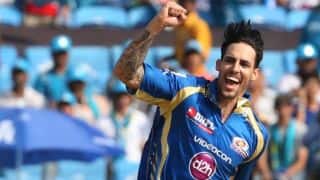 IPL 7 Auction: Where do Kolkata Knight Riders stand at the end of Day 1?