IPL 7 predictions: SRH could spring a surprise on RCB at Bangalore

IPL 7 predictions: SRH could spring a surprise on RCB at Bangalore

Gayle, Kohli will have a good day but Hyderabad likely to chase down RCB's total, predicts Pt. Anil Chaubey.

It was a tough time for Royal Challengers Bangalore (RCB) in the UAE leg of the Indian Premier League (IPL) 2014. As they return to their home turf, M Chinaswamy Stadium, Bangalore, Astrologer Pandit Anil Chaubey predicts Sunrisers Hyderabad (SRH) to edge past RCB.

Both SRH and RCB ended their UAE leg of IPL 2014 with two wins and three loses. However, the confidence will be with the Sunrisers. They ended the first leg with a win over Mumbai Indians whereas Bangalore choked in a relatively easy run-chase against Kolkata Knight Riders, faced a humiliation once against Rajasthan Royals being bowled out for 70 and then beaten convincingly against Kings XI Punjab. back on their home turf, Bangalore look to rework on their team strategy.

Scores: Known for its flat decks, Bangalore offers high-scoring matches. RCB is likely to bat first and score anywhere between 150-160 at the loss of five wickets and Sunrisers will have a good day chasing down the score.

Key Players: For Bangalore, their skipper Virat Kohli and the explosive Chris Gayle will do well along with the opener Parthiv Patel. Whereas for SRH, Shikhar Dhawan, Aaron Finch at the start will be the key and Dale Steyn too will have a successful outing at Bangalore. Among the players likely to flop, AB de Villiers will once again struggle to fire and in the SRH camp, keeper Naman Ojha and batsman Venugopal Rao will struggle to be among the runs. 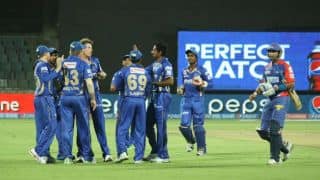 Rajasthan Royals making slow and steady recovery; Delhi Daredevils need to get their act together