As IPL 2016 is nearing the end, the Eliminator is set to witness clash between Sunrisers Hyderabad and Kolkata Knight Riders at Delhi.

Both Sunrisers Hyderabad (SRH) and Kolkata Knight Riders (KKR)  finished their league engagements on 16 points each but the Gautam Gambhir led side ended fourth behind SRH due to inferior net run rate. But going into Wednesday’s game, KKR have psychological advantage over SRH having beaten them on both the occasions during the league stage. Two-time champions KKR would look to assert their supremacy while SRH will have revenge on mind when the two teams clash in the Indian Premier League (IPL) 2016 Eliminator. A win on Wednesday will not guarantee any side a place in the final as they will have to fight it out against the looser of qualifier 1, Gujarat Lions (GL). Join Daily Fantasy League & Win Daily Prizes: CricketCountry.CricBattle.com

Best economical pick – The Bangladesh sensational bowler Mustafizur Rahman is the second highest wicket taker of Sunrisers Hyderabad after Bhuvneshwar Kumar. He holds the record of most economical bowler of this tournament.

Top captains & vice captains – KKR have been led from the front by GautamGambhir, who would be desperate to finish the tournament with a high note. Gambhir is the leading scorer for KKR with 473 runs from 14 games with five half-centuries. Just like Gambhir, David Warner has been inspirational for Sunrsiers as captain. The Australian is the second highest run getter in the tournament, amassing 658 runs from 14 games. FULL CRICKET SCORECARD: Sunrisers Hyderabad vs Kolkata Knight Riders, IPL 2016 playoffs, Eliminator at Delhi

Smart pick –KKR’s young batsman Manish Pandey, who has scored 212 runs from 11 games so far, has been picked up for the Zimbabwe tour and would be eager to justify his selection with another fine outing with the bat.

Cautions Pick –The spinning all-rounder of KKR Shakib-Al-Hassan is failing constantly with bat now a days. His bowling also going down his level in this tournament. So before picking him in your team be careful. Jason Gillespie likely to be roped in as Australia's bowling coach 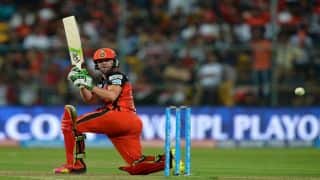