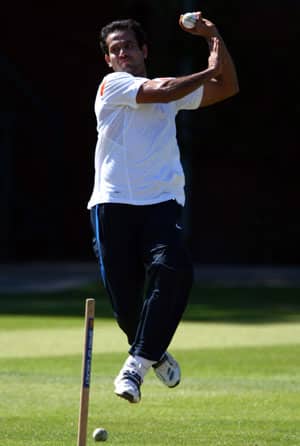 Irfan Pathan, the forgotten man of Indian cricket, is making a huge impression in the ongoing Ranji Trophy and pushing his case for a comeback in the Indian team. The injury to Praveen Kumar and his subsequent withdrawal from the Test squad for the tour of Australia presents a window of opportunity for several fringe fast bowlers, but Pathan’s performances in the domestic circuit put him at the forefront. With Vinay Kumar and Abhimanyu Mithun in the One-Day International (ODI) setup, it would be interesting to see whether the selectors take into consideration Pathan’s previous performances in Australia and his current form before taking the call.

Pathan has a liking for Australia. When India toured in 2003-04, he burst on to the scene with his impressive swing and movement. The then 19-year old was quite a revelation and was touted as the next pace sensation for India. By the time India toured again in 2007-08, Pathan was trying to fit into the Indian Test team and also trying to consolidate his place in the ODI side. His “Man of the Match” performance in the Perth Test secured a famous win for India. However, since then he has played only two more Tests and was discarded from the limited overs set-up in 2009.

As the years passed, his pace dropped and was left out of the side quite a few times. It is clear that he hasn’t lived up to the promise he showed on the 2003-04 tour. Injuries further dented his comeback march but he seems to be back on track in the ongoing season. Three five-for hauls in four games speaks of his dominance and the return of zing in his bowling.

His stats in the ongoing Ranji Trophy season:

These stats reflect his productivity and the fact that he is returning to his best. The average is very impressive as it reflects good control. Some may say that it may be too early to bring him back into the scheme of things but one mustn’t forget that a bowler like him can be very effective in Australia.

His numbers in Australia:

These stats are not a reflection of some of the fantastic spells he has bowled. As discussed earlier, his spell at Perthwas crucial in securing a win. Apart from that game, he played his three other Tests on batting surfaces and couldn’t make a great impact but even then he showed signs of getting good movement.

His inclusion would give India flexibility because of his all round ability. In all probability, Zaheer Khan, Umesh Yadav and Ishant Sharma would form the pace attack. If India decides to play four bowlers then, a spinner would join the trio to form the bowling attack. However, if the team management wants to play the extra bowler then the Pathan option would provide good balance. He can come into bat at No 7 and play the role of the fifth bowler. It may come at the expense of Virat Kohli or Rohit Sharma in the playing eleven and there is no harm in keeping that option open.

There may be a few concerns about Pathan’s pace or the lack of it. That argument withers away when you consider the fact that he would replace Praveen who bowls in the same pace range. Furthermore, the movement Pathan gets is very similar to Praveen, the only difference being that it comes from a different angle. The only issue may be accuracy as Pathan doesn’t hit the right areas as consistently as Praveen. However, his numbers in domestic cricket indicate that he has maintained a hold over the batsmen and that may further his case for a comeback.

Returning to the Indian whites wouldn’t be a very easy proposition for Pathan as he would face competition from the other contenders. Vinay Kumar was a part of the India Emerging Players team that visited Australia earlier this year and did decently well. He has silenced his critics by performing well in the recent ODIs and selectors may mull including him. Mithun is also a contender as his pace can be useful in Australian conditions. He has been on the fringes for quite some time and would be in the loop for Australia.

Manpreet Gony, the tall right-armer from Punjab is second to Pathan on the wicket-takers list in the Ranji Trophy this season. He is decently quick, has the height to extract good bounce and the Australian pitches may suite him. It is unclear whether he would be considered but he has the numbers to be heard. Pankaj Singh, a bowler who is similar to Gony toured Australia with the Indian team in 2007-08 and was the top wicket-taker in the 2010-11 Indian domestic season. He hasn’t done much this season so far and his selection looks unlikely.

S. Sreesanth and Munaf Patel seem to be out of contention. Munaf hasn’t played a game since he injured his leg in England and Sreesanth has played just one match in the Ranji Trophy without making an impression.

Before taking their final decision, the selectors have to consider several factors. They need to have a dynamic approach and keep various scenarios in perspective. If they take that approach they would see Pathan emerge as the front runner as his selection makes sense in more than one way.