India have sacrificed the stability that Cheteshwar Pujara promises following his string of failures overseas.

When Cheteshwar Pujara was dropped from the fourth Test in Australia 2014-15 following string of failures, Rohit Sharma was elevated to the coveted No. 3 spot. Rohit responded with the scores of 53 and 39 in the two innings as India clung on to a draw at Sydney, which impressed the Indian cricket management so much that they have now decided to give the right-hander a longer run in that position. Rohit has been around the Indian Test side for far too long, but he has not shown the promise that Pujara has. Neither he has done anything significant to prove he is a key player for India in Tests. Rohit has struggled against quality bowling and in testing conditions to start with and the fickleness in his batting does not promise consistency. Devarchit Varma questions whether India have made a right choice.

Rohit Sharma will continue to bat at No. 3. Rohit has impressed the batting coach Sanjay Bangar with the flair that is there in his batting, and the captain Virat Kohli has always remained impressed with the talent that he possesses. Rohit’s ability to turn around matches, score heaps of runs and his knack of massacring bowling attacks are the qualities that fit exactly into Kohli’s scheme of things. Indeed, Rohit is one of the finest Indian batsmen around — when he is in flow there are hardly any who look as gracious as him. But when the going gets tough, Rohit is the last man that India can pin their hopes on in Test cricket. ALSO READ: Rohit Sharma: The often forgotten story of the batsman’s rise

Have India made the right call to send Rohit in at the coveted No. 3 spot? Well, the debate is open. India have sacrificed the stability that Cheteshwar Pujara promises following his string of failures overseas, but Indian subcontinent is where he flourishes. If India had more confidence in Pujara, he would have certainly got his No. 3 position back from Rohit — in Bangladesh — but the team management has signalled that Pujara will have to work really hard to force his way back into the team. ALSO READ: Virat Kohli vs Rohit Sharma: Temperament vs talent

There is no harm with Rohit coming in at No. 3, but what India needs is not only stability from their top three batsmen but also runs. As far as Rohit is concerned, there is more assurance of runs coming from his bat in the subcontinent, but not overseas. It is yet not sure whether Rohit will get enough time at No. 3 spot — a Test series in Sri Lanka does not sound as daunting as the series against South Africa at home — wherein India will be on backfoot. ALSO READ: Rohit Sharma scores 177 on Test debut

Rohit has got the flair, but the key factors that make a resolute No. 3 in Test cricket are temperament and the hunger to succeed. It is a no-brainer that at one down, every team needs a batsman who is best in terms of character and skills. The one who bats at No. 3 needs gumption, deep resolve and temperament. Rohit is yet to prove himself in all these categories. All that he has done so far is scoring runs heavily in the shorter formats.

Rohit’s selection should also serve a warning to Pujara, who has been on a downfall. Pujara showed frailties in England and Australia, and the management ran out of patience. While there is no harm in tying out new batsmen, it must also be addressed that the solutions are long term rather than short. There is a massive difference between Rohit and Pujara in terms of their temperament, discipline and hunger. Rohit seems to be short of Pujara on almost every count. ALSO READ: Cheteshwar Pujara’s omission from one-off Test against Bangladesh is shocking

But where Rohit wins over Pujara is the runs and the promise. India have made it clear that they want to take the aggressive route from now on in Test cricket, and this is why they have decided to give a go to Rohit — a far more aggressive batsman than a robust but slow in scoring Pujara.

What must be kept in mind that this move of pushing up Rohit at No. 3 looks more concentrated on meeting the short-term goals. India will face South Africa for a four-Test series at home after Sri Lanka tour. And then England and Australia are supposed to tour India sometime in 2016. Team India is not travelling overseas for Tests for some time now. Both the options in Rohit and Pujara would work fine for them as long as they are playing in favourable conditions. 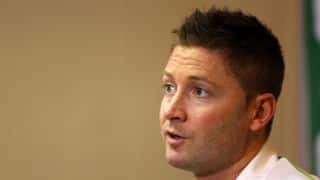