On a hot and humid Sunday at the MA Chidambaram in Chepauk, a sea of Sachinites waited expectantly to watch their God look Heavenwards, bat raised high in one hand and helmet in another. Their wait ended with the master’s stay in the crease, when Nathan Lyon uncorked out a beauty to breach Sachin Tendulkar’s defence. 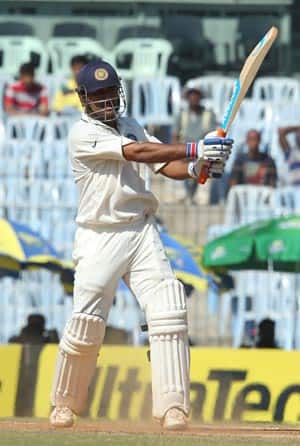 On a hot and humid Sunday at the MA Chidambaram in Chepauk, a sea of Sachinites waited expectantly to watch their God look Heavenwards, bat raised high in one hand and helmet in another. Their wait ended with the master’s stay in the crease, when Nathan Lyon uncorked out a beauty to breach Sachin Tendulkar’s defence. As Tendulkar disappeared into the pavilion, out walked the Indian captain, with an impassive face, bat tucked in arms. As he walked out, there could have been a hint of apprehension about the captain coming ahead of Ravindra Jadeja. But such scepticism was quickly dispelled — and in style.

He batted like a man on a mission as he took the Australian bowlers to the cleaners. He slashed, swept, drove, glanced and caressed the cricket ball with the panache of a maverick that he unquestionably is. It wasn’t the reckless and indiscriminate attacking that batsmen like Virender Sehwag or Shahid Afridi usually resort to; it was a more threatening breed of attack — calculated and firm. The frequency of his extravagant shots and the timing with which he executed couldn’t have been better. He passed one milestone after another as he feasted on the Australian bowling, growing stronger with every passing run. He farmed the strike and protected the tail like a soldier defending a perilous pass. When MS Dhoni was finally done partying, the Indian scorecard wore an unbeatable look. Dhoni’s belligerence had planted his team firmly in the driver’s seat.

The fact that India won the first match could be attributed to numerous factors: the ‘ugly’ Chennai pitch, local boy Ravichandran Ashwin’s finger magic, Sachin Tendukar’s vintage stuff or even the shoddy Australian bowling. However, it was Dhoni’s double century that turned the match on its head. Put Dhoni at No.6 and the Indian batting line-up suddenly looks a different unit. The opening still looks shaky and there is little the selectors can do except wait for two of Sehwag, Gautam Gambhir, Murali Vijay, Ajinkya Rahane or Shikhar Dhawan to come good consistently. Cheteshwar Pujara and Virat Kohli have justified themselves in trying to fill the gaping void left behind by Rahul Dravid and Sourav Ganguly. At No.6, Dhoni can either attack or bide his time at the crease and shepherd the tail.

Looking at the Chennai knock, one can’t help but draw parallels with a certain No.7 batsman that Australia were gifted with in the 2000s — Adam Gilchrist.

There have some clamour to sack Dhoni as India’s Test captain and even drop him from the side if he fails to perform. On the other hand, there knowledgables like Rahul Dravid who feel that Dhoni should bat higher up the order, given his temperament and resilience. With Dhoni batting at No.6, there is now the cushion of playing a specialist batsman at No.7 or a genuine all-rounder — which Jadeja is striving hard to be. At No 8 is Ashwin, a competent bat with a Test century to his credit. That gives considerable depth to the Indian batting line-up.

Come mid-2013, the Indians travel across to South Africa. It has now become a rarity for the South Africans to be a part of a five-day Test match. Such is their impact and sting on unimpressive opponents thus far. Moreover, India is yet to prove their mettle on ‘normal’ overseas pitches. Without the likes of Umesh Yadav and Zaheer Khan, it is near impossible to match their unplayable bowling attack, man to man. With Ashwin coming of age, Harbhajan getting into the groove and Pragyan Ojha breathing down their necks, Dhoni should be on the lookout for that extra pacer, the genuine all-rounder and the pure batsman up the order that he can graft in the team according to the milieu.

Dhoni is 74 Test matches old. From being the sensation with the shocking orange mane to the grey haired captain who bears Atlas’s burden, he has come a long way. It is time he takes himself seriously as a mainstream Test batsman. With his double century, he has shown that he is anything but a misfit in the purest format of the game. The dynamics of Indian batting have changed considerably since the departure of the veteran middle order. However, change need not necessarily be a bipolar concept. Whether the change helps India’s cause will largely depend on how much Dhoni backs himself to cement his boots at No.6.The crowd sweating under the relentless Chennai heat saw the magnificent butterfly. And witnessed the birth of one emerging from the cocoon. Metamorphosis is a testing affair.