Faulkner has proved his all-round abilities in all formats and demands a Test run.

James, like his father, is a fast bowling all-rounder — though a lot better.

Since making his state debut on December 14, 2008 in a one-dayer, Faulkner quickly impressed, scoring 20 with the bat, and was given his First-Class debut just two days later, when he was just 18 years old. Faulkner immediately impressed, taking three for 29 and scoring 25.

Faulkner has batted alongside fellow Tasmanian all-rounder Luke Butterworth, who is six-and-a-half years older. Butterworth was a fringe player when Faulkner made his debut, but in the last two or three seasons he has quickly risen to being one of the best all-rounders in the country.

The problem for Faulkner is that at the moment there are too many good all-rounders around the country. Along with Test incumbent Shane Watson, there are also the recently tried all-rounders in the form of Moises Henriques and Glenn Maxwell, both of whom went to India, as well as another all-rounder who previously represented Australia, Andrew McDonald. Added to that, Faulkner’s Tasmanian teammate Luke Butterworth is also doing incredibly well, while Daniel Christian is in contention and, while he doesn’t have the first class figures, Mitchell Marsh is also doing pretty well. Added to that, there are the the likes of Steven Smith and Steve O’Keefe who have at various times been considered all-rounders, plus of course the ODI discard James Hopes.

There are all-rounders everywhere!

Faulkner managed to get his national call up in spite of just how many all-rounders are lurking around the national team’s fringes. On form, he was the best domestic all-rounder in 2012-13, just ahead of his Tasmanian teammate Butterworth. He was also the second best bowler in the domestic setup that year, only behind Jackson Bird.

Faulkner actually made his Australian debut the year before, in 2011-12, oddly in a T20 match — odd because Faulkner’s T20 stats are pretty poor. He didn’t do particularly well either, going for 18 off his two overs without taking a wicket and he didn’t bat. In fact, in the six T20s he has played so far for Australia he has stunk in all but one of them. He took three for 28 against West Indies in a losing cause but overall he has managed just seven wickets in six matches at an average of 26.00 and a below par economy of 8.27. While his batting strike rate of 142.10 is impressive, his batting average is not — it is just 13.50.

After his international debut, he didn’t play for Australia for another year. In that time, though, he was the best all-rounder in the country, and led Tasmania to a Sheffield Shield victory. He took a bucket load of wickets and also scored a healthy amount of runs. While his batting wasn’t quite as good as his teammate Butterworth, his bowling was a lot better. He had to be picked. He demanded to be picked.

On February 1, 2013, Faulkner made his ODI debut, and, after taking an impressive two for 14 on debut against the West Indies, he immediately became a fixture in the Australian ODI team, and didn’t miss another match.

In his third match, also against West Indies, he had his best bowling performance, four for 48.

In the Champions Trophy match against England, we had the first hint of what Faulkner was capable of, as he smashed 54 off 42 in a losing cause, having earlier taken two for 48.

But it wasn’t until he went to India that we really saw Faulkner at his best.

In the 3rd ODI at Mohali, Australia were well behind on the run-rate when chasing 303, struggling at 213 for six with under nine overs to get the required 90 runs, at a required rate of more than 10 runs per over. Australia’s only hope seemed to be in the last remaining batsman, Adam Voges. But Faulkner had other ideas, taking the Indian bowling attack apart as he smashed six sixes on his way to 64 off 29 balls, to get Australia home with three balls to spare. Voges, the senior batsman, added just 26 and Faulkner got the man of the match award in spite of having a lower score than Voges.

In the seventh ODI at Bangalore, Australia had no hope of winning as they were struggling at 138 for six in the 23rd over, chasing an impossible target of 384, after Rohit Sharma‘s incredible 209. But Faulkner refused to give up as he smashed eleven fours and seven sixes on his way to 116 off 73 balls. At 326 for eight, with just over five overs to go, Australia needed just 58 more to win, and everyone watching was thinking that Faulkner would do it. But Clint McKay was out and the very next ball Faulkner was gone and the match was over, with India winning by 57 runs. But ask any Indian fan if they felt safe and they will all say no — with Faulkner there they knew that Australia could do it.

After those two efforts, we knew that Faulkner was something special. The question was whether he could do it again in conditions less helpful for batting.

Against England, in the 2nd ODI at Brisbane, he did just that.

England had scraped their way to 297, later adjusted to 300 after a three was changed to a six in the innings break. When Faulkner came in, Australia were in huge trouble at 206 for seven, with Nathan Coulter-Nile oddly promoted ahead of Faulkner. Batting at No 9, Faulkner was faced with a target of 95 to win off just 15 overs. Maxwell was just out for an incredible 54 off 39 and Faulkner was Australia’s last hope.

The run-rate wasn’t too bad and with Mitchell Johnson way down at number 10, you’d think that they could do it. But instead they failed to get it away and by the time that Johnson was out for one off 10, Faulkner had just 14 off 23 without a single boundary, and Australia were 244 for nine requiring 57 to win off the last six overs at almost 10 runs per over.

Faulkner immediately showed his intent after Johnson’s wicket by smashing two sixes in a row off Ben Stokes, before nudging a single and letting McKay have the strike. The next over went for just three as the asking rate went back up and then Faulkner should have been out when he was caught by Joe Root on the boundary, but Root fell back over the rope and it was declared a six. Very lucky. Had it been caught, Faulkner would have been out for 32 off 31 balls and Australia would have finished on 264 all out and lost by 36 runs.

Faulkner did little more than farm the strike in the 48th over, but in the 49th, he unleashed with two sixes in a row, again off Stokes, to set up a target of 12 to get off the final over, and Faulkner was again on strike.

If anyone thought it was going to be difficult, Faulkner quickly put their mind at ease by smashing Tim Bresnan for two fours off the first two balls. Now all he needed was four runs off the last four balls, just a run a ball. But with McKay at the other end he wasn’t risking singles, and instead smashed the third ball in a row to the boundary to set up a one wicket win with three balls to spare in the best match of his career, as he finished with 69 not out off 47 balls.

It should be noted that after 21 ODIs, Faulkner, who is not a specialist batsman, has an incredible average of 53.00 at an even more incredible strike rate of 120.45. While this average and strike rate was probably boosted by playing seven ODIs in helpful batting conditions in India, those same conditions were tough for bowling yet he still boasts an ODI bowling average of 33.64, and his all-rounder differential is an incredible +19.36!

All of this happened while Faulkner was left out of the Test team. He wasn’t even in the Test squad in India as Henriques and Maxwell were preferred and in the Ashes in Australia he was 12th man in all five Tests. Indeed, he was 12th man in four of five Tests in the England leg of the Ashes too, but he played once, in the fifth and final Test.

Faulkner scored a quick fire 23 off 21 balls to help to set up Australia’s first innings declaration. He then took an impressive four for 51 as Australia took an impressive 115 run first innings lead batting first, which was almost certain to lead to a victory for Australia, their first of the series. He was then promoted to No 3 in the batting order for the second innings and smashed an impressive 22 off 22 before being one of just two bowlers to take wickets in England’s chase, as he took two for 47. Ultimately England got close to winning, but only because of rain. If the match had been played out over five days England were in no chance of getting close to winning.

Faulkner has a Test batting average of 22.50 at a strike rate of over 100 and his Test bowling average is 16.33 — with six wickets in his first test, giving him an all-rounder differential of +6.17.

Faulkner looks a near certainty to play every Test in South Africa, where it looks likely that he will replace the batsman George Bailey. With Faulkner now having a better ODI batting average than Bailey, not to mention that Faulkner’s bowling is impressive too, it seems silly to persist with Bailey, and in South Africa the chances are that Australia will risk going in with the extra bowler to try to ensure that they can take 20 wickets in every match.

But time will tell if he is the one chosen. It is also possible that Alex Doolan will replace Bailey, leaving Faulkner on the sidelines yet again.

But there is a feeling of inevitability about his chances. However long he has to wait, everyone that watches him knows that it is only a matter of time before he is a regular in Australia’s Test and one-day line ups. And at age 23, he also has time on his side. 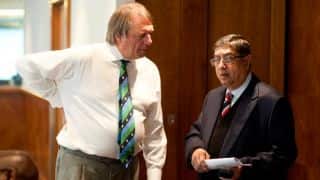