Though Holder still has a long way to go, the recent accomplishments have given enough reason to have some belief.

Jason Holder has turned out to be one of the most promising cricketers for West Indies in recent times, being one of the few cricketers in his team to display consistency on the international stage. From fighting half-centuries in ICC Cricket World Cup 2015 to a match-saving maiden Test hundred against England, Holder has given his fans as well as his cricket board, hope of an icon in the making. Amit Banerjee delves further on the subject.

The West Indian brand of cricket, especially the one after the turn of the millennium, has been one of unpredictability and entertainment.  From the gargantuan Chris Gayle to the energetic Dwayne Bravo, the men from the Caribbean archipelago are a hit in the shorter formats of the game, especially the 20-over one. West Indies vs England Day 5 at Antigua: James Anderson’s record-breaking feat and other highlights

Unfortunately, the same side faces performance issues in Tests, in which the same group of players seem to run out of steam and direction. Of course, constant tussles between the players and West Indies Cricket Board (WICB) plays a significant role in this.

Young Jason Holder‘s maiden Test century against England at Antigua was a completely different case however. It came at a time when West Indies had lost far too many wickets while chasing 438 (more realistically, bat four sessions) against an England attack that comprised a record-hungry James Anderson and a seemingly consistent James Tredwell. With the 149-ball 103 not out that included 15 fours, Holder effectively completed his transition as a valuable lower-order batsman. Jason Holder century helps West Indies save 1st Test against England at Antigua

Most importantly, it defied the expectations of West Indians falling like ninepins during a pressure situation, proving that Caribbeans had men lower down the order with patience and temperament to steer their team out of trouble. The fighting spirit displayed by Holder, along with skipper Denesh Ramdin and the likes of Jermaine Blackwood, is a major sign of progress for the team which has been dogged with controversies more often than not in the recent times. It is a positive sign that the team can save a Test despite Shivnarine Chanderpaul’s rare failure.

Holder made his entry into the international circuit during West Indies’ tour of Australia in early 2013, where the former side received a 0-5 hammering in the One-Day International (ODI) series. Holder proceeded to chart his steady rise among the ranks over the years, making a mark for himself with the ball during the initial stage of his career. In his fourth ODI appearance, he returned a haul of 4 for 13 against Pakistan to establish himself as a bowling mainstay for his side.

While he grew as a bowler over the coming months, it is the maturity that he showed during the last six months that might prompt many to dub him as the ‘next big thing in West Indian cricket’. Following the ugly pull out of the West Indian from the tour of India, the axe fell on many a player and the nation was facing gloomy times as far as their cricket fortunes was concerned. The burden of captaincy, taken away from Bravo, now fell on the 23-year-old Holder, who was barely a couple of years-old in international cricket.

It came as a shock for the cricket fraternity, more so because Holder was the youngest member of the side. It was evident that seniors (Gayle, for example) were not happy with the exclusion of Bravo and Kieron Pollard. Holder led them to the quarter-final before they ran into Martin Guptill, who delivered them a knockout punch from which they never recovered.

Holder had a few miserable matches with the ball, especially against South Africa, where he conceded more than a hundred. At the same time, he discovered his consistency with the bat lower down the order. He scored fighting half-centuries against South Africa (56) and India (57) — the two best sides of the group — during the group stage of the World Cup. On both occasions he top-scored in line-ups that consisted of much-feared explosive batsmen.

While it may be too early to comment on the Bajan’s captaincy skills, his transformation into a batting all-rounder will give fans a reason to hold expectations from him. Though he still has a long way to go, especially in terms of performing on tracks such as the ones in the subcontinent, the recent accomplishments have given the layman enough reason to have some belief. 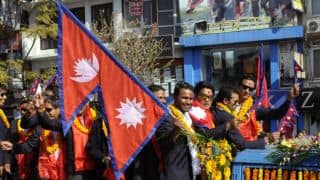