West Indies saved the Test with three wickets to spare on Day 5.

West Indies played with grit and determination on the fifth Day of the first Test against England at North Sound, Antigua to hold on to an exciting draw. Jason Holder, the limited overs captain, was the star batsman for the home side ending with a score of 350 for seven. England tried hard to get the wickets and the bowlers didn’t really fare poorly but were denied by the nature of the track. Full Updates : West Indies vs England, 1st Test, Day 5

There was no assistance for bowlers even on Day Five. Even the slightest glimpse of movement was a rare sight. James Anderson achieved the milestone of surpassing Sir Ian Botham as the leading wicket-taker for England in Tests. He dismissed Dinesh Ramdin, the West Indian skipper, to get to the much-coveted landmark of 384 Test wickets. Full scorecard: West Indies vs England 2015, 1st Test at Antigua Day 5

The day didn’t start very encouragingly for the West Indians. After his splendid effort the previous day, Devon Smith was dismissed soon on Day Five for 65. Marlon Samuels, the other overnight batsman, got out soon afterwards for 23. Shivnarine Chanderpaul was the next to get out after scoring a mere 13.Anderson becomes leading Test wicket-taker for ENG during 1st Test vs WI

At the end of the first session West Indies were at 162 for 5, and things were certainly tipped in favour of an England victory. However, the real fight from West Indies began in the afternoon session. Jermaine Blackwood was dismissed soon after lunch and Holder walked out to the middle. That was when things started to turn in West Indies’ favour.

Ramdin and Holder ensured West Indies did not lose another wicket in the afternoon session and went to tea with five wickets down. However, Anderson dismissed Ramdin to become the leading the wicket-taker for England in Tests (see above) in the evening session with about an hour to go; things began to look tricky again. However, Kemar Roach batted grittily and his defence was as good as any.

There was little assistance for the bowlers and wickets were hard to come by. Holder made most of the conditions and scored a lovely hundred to deny England victory and to take his team to safety. West Indies finally finished at 350 for 7 with Holder unbeaten at 103. Roach scored an unbeaten 15 but more importantly he played out 55 deliveries under immense pressure.

Man of the Match: Jason Holder 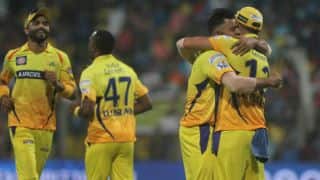