James Anderson became the highest wicket-taker for England when he dismissed Denesh Ramdin on Day 5 of the opening Test of the three-match Wisden Trophy between West Indies and England at North Sound in Antigua on Friday. Ramdin was dismissed on 57 after edging the Anderson delivery to the slips, where Alastair Cook took a safe catch as West Indies lost their seventh wicket with 294 runs on board. Live Updates: West Indies vs England, 1st Test, Day 5

Anderson, took his second wicket of the second West Indian innings, surpassed former all-rounder Sir Ian Botham‘s tally of 383 scalps to achieve the new feat. The Lancashire pacer achieved the feat in his 100th Test. Anderson is currently the 14th highest wicket-taker of all time in Tests, the list of which is led by spinners Muttiah Muralitharan (800), Shane Warne (708) and Anil Kumble (619). Following are the top five wicket-takers for England:

The dismissal of the West Indian skipper Ramdin during the final session of the fifth and final day brought an end to the 105-run partnership with Jason Holder, which rescued the hosts from a vulnerable position of 189 for six while chasing a near-impossible target of 438. England were sniffing a comfortable victory when the duo decided to fight back with a patient display of batting. The departure of the captain has put the burden of guiding the team to a tame draw on Holder, who leads the team in the 50-over format.  Live Cricket Scorecard: West Indies vs England 2015, 1st Test at Antigua Day 5 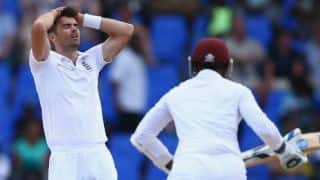