West Indies need 340 runs to win on the final day of the first Test against England.

West Indies need 340 runs on the final day of the first game of the three-match Test series against England at North Sound in Antigua on Friday. West Indies were batting on a score of 98 for the loss of two wickets at the end of the fourth day, with Devon Smith and Marlon Samuels batting on scores of 59 and two respectively.  Live Updates: West Indies vs England 2015 1st Test at Antigua Day 5

West Indies lost the wicket of Kraigg Brathwaite off the bowling of Stuart Broad with only seven runs on board after England declared on a score of 333 for the loss of seven wickets. The hosts were brought about some relief in the form of an 83-run second wicket stand between Smith and Darren Bravo, who was dismissed for an 87-ball 32, getting caught by Chris Jordan off the bowling of Joe Root, who bowled four overs and conceded as many runs at the end of the penultimate day. Free Live Streaming: West Indies vs England, 1st Test, Day 5

The visitors were earlier led by Gary Ballance’s 250-ball 122, which included 11 fours and two sixes. The Zimbabwe-born batsman was well-supported on the other end by Joe Root and Jos Buttler, both of whom scored 59 runs each. England face trouble early during their second innings when they lost their first three wickets with just 52 runs on board, before a fourth-wicket stand between Ballance and Root brought England back to their feet, with further partnerships putting England in firm control. Live Scorecard and ball-by-ball updates of the 1st Test between West Indies and England

England have a record to look forward to on the final day, with Anderson needing two wickets to eclipse Sir Ian Botham as the all-time leading wicket-taker for England in Tests, with the second wicket being Anderson’s 384th. England tour of West Indies 2015: Complete coverage 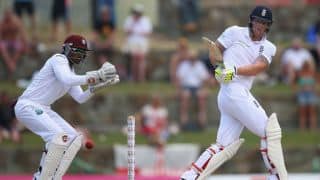 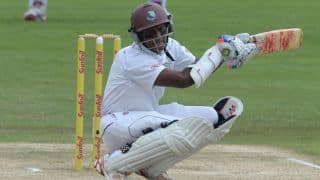