Catch the live streaming of the first Test between West Indies and England at Antigua.

West Indies resume from the score of 98 for the loss of two wickets at the start of the final day of the first Test against England at North Sound in Antigua on Friday. The hosts are chasing a target of 438 set by England, who declared on a score of 333 for the loss of seven wickets. Devon Smith and Marlon Samuels were batting on scores of 59 and two respectively, with Shivnarine Chanderpaul and Jermaine Blackwood yet to bat. Live Updates: West Indies vs England 2015 1st Test at Antigua Day 5

Catch the live telecast of the West Indies vs England 1st Test match on Ten Cricket and Ten HD. The live streaming of the match is available on tensports.com.

Live Streaming is catching up fast and one of the most popular platforms to enjoy the gentleman’s game. It has greatly captured the imagination of many, taking the cricket fans by storm, especially those who do not have access to a television set at home. With the advent of mobile phones, especially the Android operating system, one can get access to live streaming and ball-by-ball updates on the go.  Live Cricket Scorecard: West Indies vs England 2015, 1st Test at Antigua Day 5

The users however, should be cautious when browsing through the websites that claim to stream the matches live. Some pages redirect the users to multiple other pages, which only results in the user losing out valuable time, and often becoming a target of a virus attack. England tour of West Indies 2015: Complete coverage 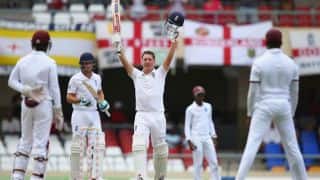