Jasprit Bumrah defended 7 runs in the final over of the match, the lowest in a T20I for India.

The second and must win T20I of the three-match series between India and England at Vidarbha Cricket Association Stadium, Jamtha, Nagpur turned out to be another thrilling contest between bat and ball. After restricting India to 144 for 8, the English batsman got off a decent start before openers Jason Roy and Sam Billings were both dismissed in the fourth over, by Ashish Nehra. Interestingly, the same had happened in the previous match as well, though the bowler was Yuzvendra Chahal. Captain Eoin Morgan then took charge along with Joe Root, and added 43-run partnership. But unlike the first T20I, Morgan departed for 17. After him, Ben Stokes did a commendable job in taking the charge but his departure for 38. Thereafter the match turned in favour of India. Root tried his best but could not avert the defeat as India clinched the victory by defending 7 runs in the final over. With this thrilling contest, we present some interesting numbers for the match.

India defended 144 against England. This was the 2nd-lowest total defended by India in T20Is. Their record remains 138, against Zimbabwe in 2016. In addition, this was the third occasion of India successfully defending below 150.

This was also the 7th instance of India posting below 150 at home, the joint second-most for any side. The record is held by South Africa (9). England and Bangladesh have also done this 7 times each.

Bumrah defended 7 runs in the final over of the match, the lowest in a T20I for India. The previous lowest target defended successfully was 12, against Pakistan in the 2007 World T20 final. The bowler was Joginder Sharma.

India s victory by 5 runs is their 4th-lowest margin win in T20Is in terms of runs.

Virat Kohli was dismissed for 21. He averages 29.25 against England his worst average against any team in T20Is. Kohli averages above 30 against all other teams in T20Is.

Liam Dawson and Chahal, both spinners, opened bowling in this match. This was the 36th T20I where two spinners bowled the first over of their respective team innings, 24th in Asia and 6th in India. The last such instance happen in India during the World T20 2016 clash between India and New Zealand at the same venue: Ravichandran Ashwin and Nathan McCullum were the spinners that day.

This was the 9th time India opened their bowling with a spinner, while it was the 6th instance for England. For England, every single instance has come overseas. England have actually done this more frequently than India in Asia.

With 3 wickets in today s match, Ashish Nehra is now India s 2nd-highest wicket-taker in T20Is. He went past Ravindra Jadeja s tally of 31 and is only behind by Ashwin, who has 52. Similarly, Bumrah, with his 2 wickets, reached 30, ahead of Yuvraj Singh and Irfan Pathan (28 each). Bumrah is currently 4th on the Indian list. He had made his T20I debut barely a year back, on January 26, 2016.

Nehra s figures of 3 for 28 are the also best by an Indian pacer against England in T20Is. The record was earlier held by Irfan Pathan (3 for 37).

With the wicket of Morgan in the 11th over, Amit Mishra completed 200 wickets in all T20 cricket. He became the second Indian to reach this landmark after Ashwin (also on 200). The all-time leading wicket-taker in T20s is Dwayne Bravo (367). Ashwin and Mishra stand at joint 17th.

Root was dismissed for 38. This is the first time when Root was out below 40 on this tour. This was the 9th match for Root in this tour and has registered 6 fifties and a hundred. He scored 46 not out in the first T20I. 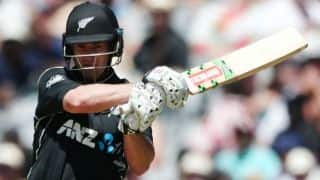 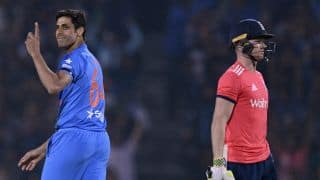