Derek Abraham (DA): The World Cup is on. Who’s caught your eye?

Jeff Thomson (JT): Maybe some people that have developed a bit. Like New Zealand, mainly. And some other people like Ireland, who have beaten the West Indies. I don’t know if anyone else has developed at all. Otherwise, it’s just the usual teams. I mean cricket is only going to go somewhere if other people get better at it rather than three or four teams playing (in the later stages) all the time.

DA: The next World is going to be a 10-team affair. Does that worry you?

JT: It’s only good to have a tournament if there’s quality. There’s no fun having teams that are going to be easy to beat.

DA: How important a role will the fast bowlers play?

JT: I don’t think it really matters because it will depend on the pitches. When you play in India, it spins a lot because the pitches are so dead. So, you know, it’s all irrelevant. Pick the squad that suits your needs.

DA: There have been a few 300-plus scores already…

JT: Yeah, these are flat pitches. There are bigger bats. It’s just getting harder for the bowlers because there are so many limits. You can’t bowl short, you can’t bowl on either side of the wicket. Having said that, it’s all the same for every side.

DA: Which fast bowlers excite you the most?

JT: I have always loved fast bowling, obviously. I mean Australia have got a fair number of fast bowlers. It’s a fair battery of sharpish bowlers. They aren’t any further than that. They are not sharp. New Zealand, perhaps. South Africa are always a threat with their bowling. Dale Steyn, on his day, is the better bowler around. India lack that punch. They have, sort of, dropped off. You guys have always had a couple of bowlers who take wickets early, but they can’t finish it off. I think Ishant Sharma, who I thought was a good bowler when he started off, has developed a bit. But now, he seems to be going through the motions. He seems to have stopped at a certain pace. And then, there the other young guys like Umesh Yadav. Isn’t he the fastest of them all. Isn’t he a bit stocky?

JT: Yeah, that guy needs to sort his action out a bit. He bowls too much on the leg side. You know, he has got to keep the pressure on. He gives away too many easy runs. If he assorts that out a bit, he might be okay.

DA: What are your thoughts on the existing rules in the ODI game? There are two new balls…

JT: Yeah, they are just trying to help the bowlers. But I think that the older ball is hard to hit sometimes. I saw a Barry Richards article in the papers. Barry tends to be a bit weird sometimes, but he has said it’s too hard for the bowlers these days. Finally, a batsman is saying it. The bats are deadly and big. I have always wondered and I have always said it when people got into trouble for tampering that I just don’t believe in it. Look, the batsman can do whatever he likes. You have a new ball at the start of an innings. It swings around and moves around and bounces around. But when the old ball starts swinging a bit, why do people complain about it? You know what I mean. You know what reverse swing is, so you got to play it. So what’s the difference? So what if the fielders scruff it up a little? Who cares? I mean I have said this right from the start. Who cares? It’s the same for everybody. It swings. So the batsman has got to realise that it’s going to swing the other way too. So he has got to watch out. Is that hard? Is that difficult?

DA: But the batsmen always want it easy…

JT: Yeah, but I am just saying that it’s no different than it is at the start of the innings. Look, I bowled with the new ball and it used to swing the wrong way. Yeah, so that’s reverse swing. But I didn’t know that. So, why the hell don’t you allow them to whatever they want to do with the ball as long as they don’t go drastic other than maybe scruff it up a little. Who cares?

DA: Dennis Lillee and you made a great pair. How did you complement each other?

JT: Well, we both had different actions. So, that’s how we complemented each other. He was really in your face, aggressive and all that. You wouldn’t die wondering what he was thinking as a batsman whereas I never said much. Well, it’s pretty true that I bowled quicker. And if I don’t say anything, so you don’t know what I am thinking (laughs).

DA: Were you and Dennis always mates?

JT: Yeah, we were good mates and have always been.

DA: Who were the other bowlers that you admired?

JT: Michael Holding and Joel Garner. I mean Garner was so big. Michael, well, he was a great athlete. I also liked Malcolm Marshall.

DA: Did you and Lillee plan your dismissals? Did one of you create the pressure and the other get the batsman out?

JT: Yeah, sort of. The team knew who’s doing what. We knew what we were doing. We knew who was what. That’s how we got them out quicker. Who wants to give them batting practice?

DA: Who decided who would bowl from which end?

JT: That was always the thing. Dennis was just (being) Dennis. He was older than me. So he often ran me down (laughs). He never wanted to run into the wind. So I did that because I had a shorter run-up. But it worked for me, I guess. Sometimes, when the wind is (blowing) in your face, it helps you balance better. When it’s behind you, it can push you off balance. But after an hour or so, I would bowl from wherever I liked.

DA: India have always had trouble finding a genuine fast bowler. What can they do about this?

JT: Look, India is not the only place (which hasn’t produced many great fast bowlers). OK, Pakistan are your neighbours and they have had some good ones. But they are a bit bigger, aren’t they? I mean I can see that as you go to northern India, the people are a bit bigger, aren’t they? So, I don’t really know because I haven’t really run around India to actually know what’s what. Dennis was over there at the MRF Pace Academy in Chennai. I guess I have been there a few times. Look, you don’t have to be big (to become a great fast bowler). I am not big. Malcolm Marshall was a bit smaller than me. So, you don’t need all that (size/height). All you need is to be athletic. Look at Imran Khan. He is probably my height. But he bowled quick. The point is that you don’t have to be a giant. And I tend to think the bigger (and bulkier) bowlers aren’t quick anyway. Kapil Dev was fast-medium, not express. But he was very good. He was from Chandigarh (which is again in north India). He would be 6’2”.

DA: Did you watch the Ashes last year? Everyone said that Mitchell Johnson was Thomsonesque in the way he terrorised the English…

JT: Yeah, he has got more aggressive. What he has done now is that he has slowed down his steps a bit. He no longer has that big stride. He is a bit higher at the crease. Earlier, his arm was low (at the point of delivery). And that led to bad positioning of the ball. I mean he just fixed a few things. Dennis helped him. But I wonder why did anybody let him go (off track) for so long anyway? What does it take so long (to sort out a bowler’s problems)? I don’t know who he was involved with earlier. But Dennis made him a different bowler. Yeah, he gets a bit more bounce and a bit more pace and a lot more wickets. His delivery is a lot better. So it’s nice to see that because it’s really sick to see batsmen score so many runs. Blokes like (David) Warner are just going out and hitting the ball and the guys just don’t know how to bowl to them. Blokes like (Aaron) Finch and Warner still think they are playing Twenty20 cricket.

DA: But Warner is exciting to watch…

JT: Yeah, he is exciting to watch. But he seems to be getting into trouble a little too much. He always has a mouthful to say.

DA: So, what do you do these days?

JT: I have been an after-dinner speaker for nearly 40 years now. I do sports (talks), jokes, humour. I do everything.

JT: Yeah, I am just lucky I guess I don’t do much (physical work). It’s just luck. That’s the way I was born. Some people are fat, some people are thin.

DA: And some are dashing till they die…

JT: [Laughs] No, there’s nothing like that. I am just athletic. And I guess that helps.

JT: Well, I suppose it did. Not many people spoke about it, but it happened to me when I was 24. The guy I used to live with got killed. His name was Martin Bedkober. He moved to Queensland and he lived with me. I had a good deal with Queensland, so I had this guy live with me for nothing. He was playing grade cricket in Brisbane. So I was in Perth playing a Test match against the West Indies in 1975 and while I was there, Martin was in Brisbane playing grade cricket for my club. He was a good opening batsman and wicketkeeper. He was a real star from Sydney. A real star. The poor bloke got hit in the chest playing for my club. And he was dead within 12 minutes. So I was playing when they told me. We were bowling. And we lost that Test match (by an innings and 87 runs). That’s the only Test we lost (Australia won the six-match series 5-1). The next week went to Melbourne and I destroyed them because I was angry (Thomson took 5/62 and 1/51 as Australia won by eight wickets). So, yeah, Phil Hughes wasn’t the first bloke (I knew who died on the field). I was watching the news on TV and, instantly, I was concerned. When I heard that blood was coming out of his ear, I was low. Your ear bleeds when you brain bleeds. It was really playing on my mind. I didn’t get time to think about Martin because he died within 12 minutes of getting hit on the chest. But Phil was in hospital for a day or so. So, all those memories from 40 years ago came back in a flash this time.

DA: Who do you think will win the World Cup?

JT: Look, there’s New Zealand, us, South Africa. Pakistan haven’t changed much. The West Indies are just hopeless. And, then, there’s who else? Canada and all those people?

DA: How about India?

JT: Yeah, their batting is OK. Hey love to just punch the bowlers around.

DA: So what are your plans?

JT: Look, there’s something we are doing. It’s a website called Total Cricket. We will launch it here first. But we are also coming to India. Basically, it’s about how young guys can be like Dennis, (Glenn) McGrath and me. It will help them improve their game. Wait for the launch. 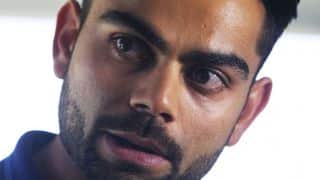