Did Mumbai Indians (MI) eventually crack the Rising Pune Supergiant (RPS) code? Or was it simply the occasion and pressure of the stage that got the better of Pune? We are living in a T20-dominated world where chasing 10 to 12 an over has become a norm. All Pune needed was less than six-and-a-half an over. Pune had completed a hat-trick of wins against an impressive Mumbai outfit this season, but they chose to crack on the day it mattered. Eventually it was a solitary run that made the difference to the grand Maharashtra derby at Hyderabad and here are the moments where Pune lost the plot. FULL CRICKET SCORECARD: Rising Pune Supergiant (RPS) vs Mumbai Indians (MI), IPL 2017 Final at Hyderabad

Leaking at the death: Pune s bowlers had done all the hard work to have Mumbai reeling at 92 for 7 after 17 overs. Two days prior, Mumbai had Kolkata Knight Riders in a similar position. Mumbai dismantled Kolkata for 107 that night. Pune gave away 37 runs off the last 3 overs.

There is no doubt that Krunal Pandya was brilliant, but he was helped by some ordinary bowling from Dan Christian. There were length balls, not according to the field. Mitchell Johnson was allowed to free his arms. It was only in the 19th over when MI crossed the six-an-over mark for the first time in the game. The last over cost Pune 14. A four and a six off Krunal s bat can be excused, but there were two wides as well. Was it a case of complacency? Mumbai Indians (MI) in IPL 2017: Marks out of 10 for Rohit Sharma-led champions

In the end, every run mattered. RPS s brilliant bowling throughout the innings but in hindsight, Christian s 26 off last 2 hurt the side, as did the 5 wides they bowled during the innings.

Tame Powerplay: Ajinkya Rahane found form in the end stages of the tournament. Steven Smith has been scoring from the start. And yet, Pune went for a cautious approach in the Powerplay. Mumbai had, in fact, employed five different bowlers in the first 5 overs. Rahane was dropped by Krunal off Lasith Malinga. It was nothing short of a sitter. Rahane did make use of the opportunity, but Smith was happy to stay at the crease without trying to accelerate when the field was inside. Earlier, the otherwise flamboyant Rahul Tripathi went for an ultra-cautious approach. RPS were 38 for 1 after 6 overs. RPS vs MI, IPL 2017 final: Rohit attains new high, Smith’s misfortune and other highlights

The curious case of Pune s No. 4: Too much of shuffling in the batting order has not helped Manoj Tiwary s case. Tiwary has been one of the most consistent performers for Pune this season. He has played those blinders towards the end of the innings several times this season.

Rahane fell for an attractive 38-ball 44 in the 12th over when the score read 71. With Smith sort of struggling at 18 from 25 balls, Pune could have sent in Tiwary. MS Dhoni walked out instead.

Was there need for machismo and finishing things in style with a six? Or was getting the scoreboard to move the need of the hour? Fairytales are often not repeated. It is not wise to expect them daily.

Dhoni and Smith have struggled when they have batted together. With the required run-rate close to seven-and-a-half, their partnership hurt Pune s case. Rohit goes past Dhoni, Gambhir; other statistical highlights from IPL 2017 final

The Dhoni-Smith stand: Dhoni has been a shadow of his pristine past this IPL. The number of dot balls he has played has hurt Pune many times throughout the tournament. Smith and Dhoni consumed too many balls and were guilty of not rotating the strike.

Criticism of Dhoni is often considered blasphemous by most Indian fans. To most he is the protagonist or the victim or the unsung hero. The usual scapegoats in these cases are unsung men like Tiwarys and Christians. In franchise cricket, if you pocket bigger amounts and are a superstar, you should be the one taking onus.

Smith and Dhoni added 27 from 27 balls. By the time Dhoni departed the required run rate had shot up to eight-and-a-half. By the end of the game both had played a total of 25 dot balls. Rohit s Midas touch in IPL finals and other stats in statistical preview from RPS and MI clash

Keeping it for too late: Malinga and Jasprit Bumrah are two of the finest death bowlers in limited-overs cricket. If Bumrah can restrict the likes of Brendon McCullum and Aaron Finch to 5 runs in a Super Over, it is a tough task to score 10 off them at death, on a surface that was not very easy to bat on.

That was probably the time they needed a Dhoni more than a Tiwary, for while Tiwary can get those boundaries away, Dhoni has the power to clear the ground even if with mis-hits. And if Tiwary has to bat that late, they should probably have promoted a competent slogger like Christian.

Smith s six off Burmah in the penultimate over got Pune back in the contest. He had moved to 51 from 49, and it was the slowest fifty this IPL.

With no Ben Stokes, Pune were batting with one less batter. That probably made Smith want to bat till the end.

Tiwary s brain-fade: Tiwary is no rookie. He was one of the big buys in the inaugural IPL. He is a domestic stalwart. He leads one of the high-profile sides in domestic cricket. He has been in the situation before. Remember, he scored 2 boundaries off Dwayne Bravo in the final over to help KKR lift their maiden IPL Trophy in 2012. This was a similar job.

He started well with a smartly placed boundary, bringing the equation down to 7 off 5 balls. So far, so good: singles could have done the job at this point.

Unfortunately, in a moment of madness Tiwary looked to clear the long-on only to find the patrolling Kieron Pollard. Of course, one must credit Mitchell Johnson for altering the length and not bowling too full.

That was the first hammer to the nail.

Smith s freak dismissal: Seven from 4 with Smith on strike. Four out 5 times you would expect the batting side to win. Unfortunately, this was that other occasion. Smith went deep into the crease. He sliced one brilliantly over extra-cover. On another day we would have praised Smith s batsmanship and array of strokes. Unfortunately, the flat trajectory meant that and the ball came swerving to Ambati Rayudu at sweeper cover. Rayudu, the only fielder placed outside the ring on the off-side, took it at an awkward height.

Smith took the long walk back: 7 from 3, Johnson the bowler and a teenage Washington Sundar the batsman, Mumbai had sealed it there.

When you re three down for a majority of your innings you should be winning that game. They let the rate climb, they were too cautious up front in the first 11 or 10 overs, said Ajit Agarkar in his analysis for ESPNCricinfo. It sums up the rest.

Fairytales do not happen every day, I say at the risk of repeating myself. It is not wise to expect them either. Jay, Mahi, Smithy as the meme goes had their highs this season. But the final came as a reality check: as all we know, cricket has no place for Amarendra Baahubali. Smith is a human, as is Dhoni. 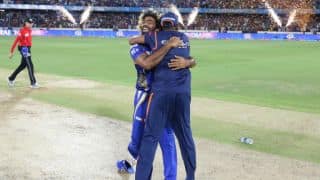 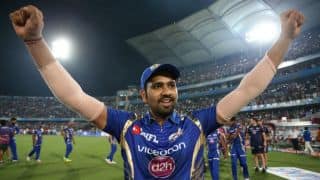