IPL 2017 final will see MS Dhoni take part in an IPL final for record 7th time in 10 editions, the most by any player in the tournament.

7th time MS Dhoni will be the part of an Indian Premier League (IPL) final out of 10 editions, the most by any player in the tournament. He represented Chennai Super Kings (CSK) in his previous 6 finals; this time he will take field for Rising Pune Supergiant (RPS).This will be also the first time when Dhoni will play final of IPL as a player, not as captain. FULL CRICKET SCORECARD: Rising Pune Supergiant (RPS) vs Mumbai Indians (MI) – Final

4th IPL final for MI, the 2nd-most by a single team after CSK, who have reached the final in 6 editions. One must remember that CSK have played only 8 editions of the tournament and MI 10.

3rd time Rohit will be playing IPL final as captain, the 2nd-most by any skipper in the tournament’s history after Dhoni (6).

4th clash of MI and RPS in 2017, the most between any teams in this season. This will be the 5th instance of two teams playing 4 times in an IPL season. The previous instances happened between CSK and Royal Challengers Bangalore (RCB) in 2011, CSK and MI in 2013 and 2015 and KXIP and KKR in 2014.

4 overseas captains have led an IPL side in the final: Shane Warne for RR in 2008, Adam Gilchrist for DC in 2009, George Bailey for KXIP in 2014 and David Warner for Sunrisers Hyderabad (SRH). Steven Smith will become the 5th captain to achieve this feat. Interestingly, all have been Australians.

Note: MI are also the only team to win an IPL title after losing Qualifier 1, in 2013. Will they be able to do it again this time?

1st time two teams of the same state clashing in an IPL final — MI and RPS. Both are part of Maharashtra state in the country. Of course, no other state has two IPL teams.

1 catch needed for Rohit to complete 50 catches for MI in IPL. He has taken 71 catches in IPL.

19.4 batting average of Dhoni at Hyderabad in IPL, his worst at any venue with 5-match cut-off. He has scored 97 runs from 5 matches here. 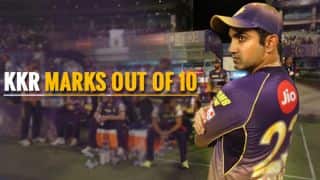