Kanwar Rai Singh was a surprising selection for India’s 1947-48 tour of Australia, where he played a solitary Test. He later joined the Army.

Kanwar Rai Singh, born February 24, 1922, was a surprising selection for India s 1947-48 tour of Australia. He played sporadically on the tour, but that included his solitary Test. He later joined the Army, which resulted in a punctuated cricket career. Abhishek Mukherjee looks back at a forgotten name in Indian cricket.

Kanwar Rai Singh s two-decade career amounted to a mere 38 First-Class matches, which indicates how sporadic his appearances were. Only 22 of them were in Ranji Trophy, where he represented Southern Punjab, and later, Services. He also made it to India s 1947-48 tour of Australia, their first ever tour to the country, and played a Test.

Rai Singh scored 1,778 runs at 30.13 with 4 hundreds. The numbers were nowhere close to impressive, but in the four seasons before the tour, he got 664 at 51.08 with 3 hundreds. The fact that the other seasons fetched him 1,114 runs at a mere 24.22 bears testimony to his general performance.

A Sikh hailing from Darkoti, Rai Singh s strength probably had to with his genes. A fearless, aggressive batsman, he often collared bowling attacks, often taking a risk too many for his own good.

He also rolled his arm over (Ramachandra Guha wrote that he bowled out-swingers with a high, classical action and fine control ), and his 21 wickets came at a not-too-bad average of 33.33.

A student of Aitchison College, Lahore, Rai Singh started his career in the Bombay Pentangular, scoring 26 and 57 and bowling Anwar Hussain. First-Class matches were not regular. The Pentangular was in its dying stages, while Southern Punjab, Rai Singh s team, was on a decline after reaching the Ranji Trophy final of 1938-39.

When the Australian Services team toured India in 1945-46, Rai Singh, batting at No. 9, scored 40 not out. In his next two innings, against Delhi and Northern India, he batted once each, scoring 132 and 117.

The big innings came the following season, for Maharaja of Patiala s XI against Vijay Merchant s XI, a match featuring the who s who of contemporary Indian cricket. Rai Singh got picked for Patiala s side, which probably had to do with the fact that he was an uncle of Yadavindrasingh, the Maharaja. Before he became king, Yadavindrasingh had played a Test for India (as Yuvraj of Patiala), scoring 24 and 60 against England.

Merchant s side scored 348, while Patiala s men just about managed to save the follow-on, with 199. They were eventually set 425 against Vinoo Mankad, Sadu Shinde, Gul Mohammad, and Amir Elahi.

There was some resistance from Lala Amarnath and Chandu Sarwate, but when Rai Singh walked out, the score read 92 for 4. He launched a furious onslaught as Sarwate dropped anchor at the other end. The pair added 156 before Sarwate fell.

Rai Singh lost Ranga Sohoni, but CS Nayudu dug in, helping add 79 for the seventh wicket. For the eighth, Rai Singh added another 46 with Ebrahim Maka. Unfortunately, it was too good to last, and when our hero was caught by Imtiaz Ahmed off Mankad, he had already scored 158 with 15 fours and 3 sixes. Patiala s side lost by a mere 29 runs.

That innings tipped the scales. Wisden later wrote that the innings probably secured his selection as a late replacement for the tour of Australia, but added that the fact that he was the Maharaja s cousin no doubt helped.

Merchant, Mushtaq Ali, Rusi Modi, and Fazal Mahmood all opted out of the Australia tour the following season, and the selectors called for substitutes. While Sarwate was a deserving candidate and Commandur Rangachari was a replacement for Fazal, Rai Singh and Maharaj Shri Ranvirsinhji were, to put things politely, ordinary options that Anthony de Mello insisted on. It is to be noted that Ranvirsinhji was also a cousin of Yadavindrasingh.

The process was a bit dramatic. Amarnath was a last-moment nomination as captain, and he had to rush to Delhi, first by car, then by train, and finishing on foot (the Kurukshetra-Delhi stretch). While the rest of the team left, Rai Singh, Ranvirsinhji, Sarwate, and Rangachari arrived on a different vessel, a week later.

It was a disastrous tour for India and Rai Singh, who played only 4 matches, scoring 52 runs at 7.42. He did slightly better in the minor matches. He got 71 against Southern New South Wales, a match where he also took up the big gloves from Probir Sen during the match.

Unfortunately, that remained his only performance of note on the tour in a match that was not given First-Class status. However, Ken Williams noted in the 2007-08 summer edition of The Yorker that Rai Singh s brightly coloured turbans made him a popular figure in Australia.

For some inexplicable reason, Rai Singh was picked for the third Test at MCG, after India were trailing the series 0-1. Things went as expected: Don Bradman scored a hundred and Australia secured a 103-run lead. Amarnath reduced Australia to 32 for 4 before Bradman scored his second hundred of the match (for the only time in his Test career), setting India 359.

The Indian line-up had a strange look to it. The top six men in the batting order Mankad, Sarwate, Gul Mohammad, Vijay Hazare, Amarnath, and Dattu Phadkar were also the six men who bowled in the Australian second innings.

So Hemu Adhikari, Rai Singh, and Khandu Rangnekar, good batsmen, all of them, batted at 7, 8, and 9. Rai Singh had been caught by Sid Barnes off Ian Johnson in the first innings for 2. In the second innings, immediately after lunch on Day Four, he walked out at 69 for 6, and added 31 with Phadkar in a mere 18 minutes.

Of these, Rai Singh slammed 24 in 25 balls with a four and a six. Wisden acknowledged his a few good hits . India crashed to 125; Gul Mohammad (28) was the only one to score more than Rai Singh.

The innings, however, grabbed attention from the MCG crowd. The Indian Express reported: Bill Johnston bowled to Rai Singh, batting in a salmon pink turban and wearing a sweater. The crowd screamed with delight when a little later Rai Singh jumped out to Ian Johnson and drove him over the sight-board for the Indians first six of the series. Rai Singh had scored 15 of the next 16 since lunch, but in Bill Johnston s next over he mistimed in going for another big swing and was caught behind the wicket.

On his return, Rai Singh continued to play domestic cricket, though he was never good enough to merit a recall. He played the touring West Indians of 1948-49 for Bombay Governor s XI, and top-scored with 72.

He became a Captain in Patiala Army, and was later promoted to Major in the Sikhli Regiment. When MCC toured India in 1951-52, Rai Singh, playing for Services, got 21 and 41. Responsibilities at the frontier took over, and Rai Singh played a mere 10 matches across the last ten years of his career. 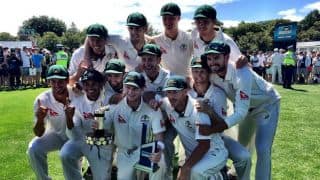 Australia replace India as world No.1 in ICC Test rankings 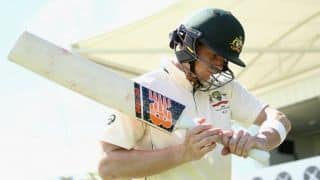