Keep calm, Bangladesh: India will not be a hurdle

Keep calm, Bangladesh: India will not be a hurdle

An open letter to the Bangladesh cricket team from a well-wisher ahead of the 2nd ODI.

With the record win at Mirpur, you are probably high on adrenaline as you take on India on the second One-Day International (ODI) of the series. You have every right to be. India are, after all, the team that had knocked you out of ICC Cricket World Cup 2015. There had been a lot of hoopla over a couple of decisions during the quarter-final, but let us not get into that.

The Mirpur victory was certainly not a one-off. It was, in fact, the ninth consecutive ODI triumph for you at home. Even if one discounts the 5-0 victory over Zimbabwe, you had ‘Bangla-washed’ Pakistan 3-0 before beating India comprehensively.

There are speculations over whether India were complacent at Mirpur. Some of the strokes certainly suggested the same. It does not matter anymore, for the victory is a matter of the past. You have got over the stage when you celebrated matches; you have tasted clean sweeps; you have reached the knockout stage of a World Cup; and most importantly, you look hungrier than ever.

In terms of sheer talent, this side is probably the best in your history. It is not only about Shakib Al Hasan anymore. Tamim Iqbal, Mushfiqur Rahim, and Mashrafe Mortaza were always there, but this time they are backed up with serious talent.

Soumya Sarkar, for example, has turned out to be a revelation, and has more than made up for the absence of Mahmudullah. Litton Das has turned out to be a good prospect. Sabbir Rahman and Nasir Hossain have proved their worth. And yet, despite everything, your recent success story has to do with a rise of pace bowling than anything else.

Mortaza has certainly lost pace, but he provides experience to the attack, and is certainly the most accurate of the lot. Mustafizur Rahman is slow in the air, but he deceived the Indians with his innocuous-looking cutters. Most significantly, there is the duo of Rubel Hossain and Taskin Ahmed — men who generate raw pace, something one does not associate with Bengalis.

There is no passenger in the side this time. For once, the world is taking you seriously. For once, you are the favourites going into a match against India. There is one question, though: can you handle of success?

You have had a taste of failure since you became a part of international cricket in 2000. For several years winning consistently was an alien concept for you. This is different. With nine wins on the trot and a World Cup quarter-final berth behind you, you will go into the match, all pumped up, to seal the series.

As it has often happened, this is where things may get horribly wrong. This is when teams try to overdo, and as a result, make grave errors, losing major plot points, and eventually conceding matches. Winning is a habit, guys. You have been successful over the past few months, which makes tomorrow’s match even more crucial.

Do not get carried away or overwhelmed. Everything is going according to plan. Stay calm. For tomorrow, focus on the match, not the result. That has always been the success mantra for good teams. Stick to a plan. Have a Plan B. Keep India under pressure, but do not overdo it. Wait for their errors. Seize every initiative. There is no reason the day should not be yours. PREVIEW: India vs Bangladesh, 2nd ODI at Mirpur

Remember, Virat Kohli, their ace batsman, has not got going this series. Remember, it has been ages since MS Dhoni has pulled off one of those spectacular chases. Remember, your pacers are better than theirs. Remember, you have the finest all-rounder in contemporary cricket in your side.

You will take field as favourites today. Just keep calm. Rest will follow.

A well-wisher of you, and generally, of cricket. 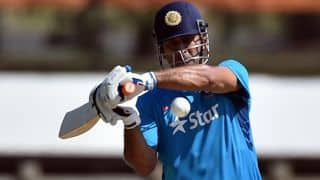 MS Dhoni could consider batting higher up the order against Bangladesh