Melbourne: The dream for Bangladesh ended as they were beaten by 109 runs in the ICC Cricket World Cup 2015 quarterfinal against India at the Melbourne Cricket Ground (MCG). Though they had a few moments with the ball, India were far too superior for Bangladesh and eased towards victory. Once India had set up 303 to win, Bangladesh were always going to find it difficult and they never really challenge India during their run-chase.

Rohit Sharma’s magnificent 137 and Suresh Raina’s combative 65 helped India post the big total. Rohit had started the innings well with Shikhar Dhawan as they brought up India’s fifty inside the first ten overs. However, Bangladesh then pulled things back. Shakib Al Hasan and Rubel Hossain were very good in that interval. India lost wickets and were in a bit of a spot at 115 for three at the end of 28 overs. Watch: VIDEO HIGHLIGHTS: Rohit Sharma 137

That is when Raina and Rohit got together. From the outset, Rohit looked set to play a big one as he knocked the ball around and did not take too many risks. Raina also got into the groove by placing the ball around and getting the singles. He did have some early luck as Mashrafe Mortaza hit him in front of the stumps. Bangladesh challenged the umpire’s call, but the replays showed that the ball had pitched slightly outside the leg-stump. Watch: VIDEO HIGHLIGHTS: Indian innings

Raina settled by the time the batting powerplay came around. The duo then hit 50 in those five overs and injected momentum in the Indian innings. Rohit then had his moment of fortune when he hit a high full-toss to deep square-leg. The umpire called it a no-ball for height but replays indicated that the ball may have just been near the waist. Those moments cost Bangladesh as Rohit went on to score 137, smashing quite a few big hits in the end. Raina was dismissed for 65, an innings that gave India much needed momentum. Ravindra Jadeja’s strokeful 23 towards the end helped India cross the 300-run mark. READ: MS Dhoni wins 100th match as captain

In reply, Bangladesh were never in the game They only had fleeting moments of success when the batsmen showed their abilities, but it was too tall a task for them. They kept losing wickets at regular intervals with the Indian bowlers dominating the proceedings. Umesh Yadav, Mohammed Shami and Ravindra Jadeja shared the spoils. Umesh was too hot to handle for the Bangladeshi batsmen. There were barely any electrifying moments in this innings, save for MS Dhoni’s remarkable diving catch of Soumya Sarkar. READ: Mohammed Shami becomes leading wicket-taker

India now head to Sydney for their ICC Cricket world Cup 2015 semi-final. They will face the winner of the Australia- Pakistan quarterfinal at Adelaide. 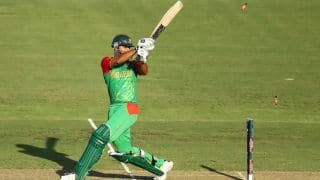